As some of you might remember, I went cheering last year for this race in a bikini. It caused a bit of a commotion, and to this day, I still hear about it. So I hung the bikini, bought 3 more sunny suits because I didn’t think I could take that one outside again, and moved on. Until this past weekend happened.

The girls in my team were cheering for the Portugal Day 5 miler, a men’s point race that the boys in my team have to run. And as they cheered for us during last weekend’s Mini10K, we were to return the favor. In Style of course. Cause we roll hard.
So, there was a bit of prepping, sign-making meet up, I just showed up in the bikini and they had made me a “fake pool”, and a special sign. Amazing amazing team mates! 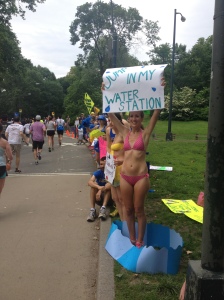 that’s my fake pool in my fake water station. 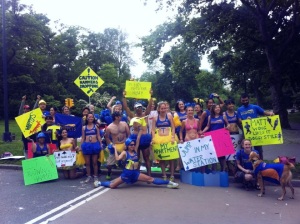 All ready to cheer. Notice we have Whippets of the human, canine, and real cheerleading type!

We also decided to cheer twice, on the east and west side, around 72nd st, so nobody would miss us. My team is growing a cheering reputation and we didn’t want anyone to miss it! 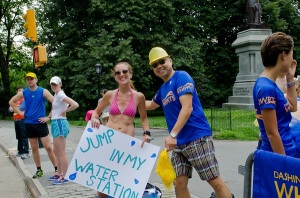 Hard Hat Kenneth, being mindful of the Hammer Rain 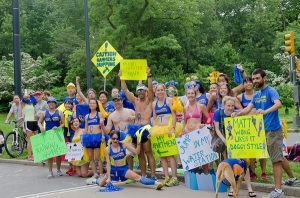 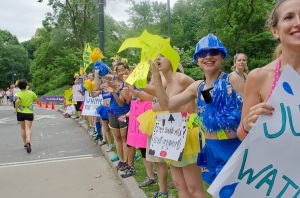 What is up with the hammer talk  and the hard hats, you ask?

Well, a fabo Whippet, Simon, started this whole “drop the hammer” talk, you know, “drop the hammer”, as in push your guts out, and it stuck. A LOT. It has become a bit of our team’s moto in a way!

The pool and the sign (by Rose, thanks!!) were a huge hit. Lots of people fake dived in my pool, men AND women blew kisses,  hollered, winked, gave thumbs up, and they all smiled or laughed. I think they liked that I had no shame. I know I don’t look like a supermodel, but it’s all about how you feel in your head, and I am delusional like hell. It really helps and I am very happy all up in my fantasy world 😉 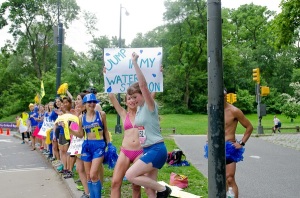 So, they boyfriend wanted nothing to do with dressing up. I told him he couldn’t come with me in runner’s clothes or it would throw off our look (well, not runner, he only has Ironman outfits!). So we started little by little and all the other girls in the team helped woo him. It turned around and he was shirtless and had a R in his abs… He looked amazing. And I heard a few “thanks for bringing him”. Oh my. Eye Candy. 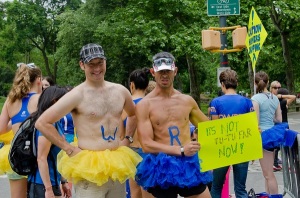 Hilarious. Which one is trying to compensate with a tough face for the tutu? 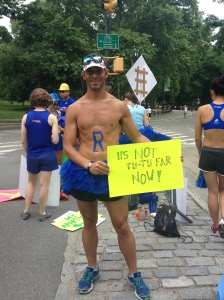 It was all ridiculous and amazing, and super fun. I don’t think I ever saw so many smiling runners. 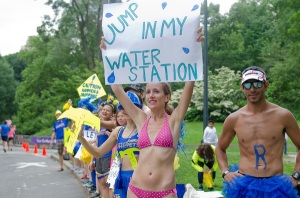 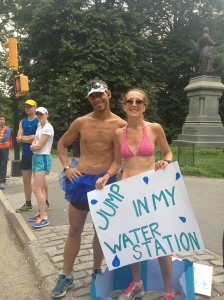 -Running can make you happy even when you are not running yourself
-Being ridiculously fun and delusional is the best cheering
-No shame! Ever.

17 thoughts on “NYRR Portugal Day – Cheering in a bikini, a year later!”