OMG, so last night a really good friend offered Juan and I tickets to go see Meb at the 92Y (a fantastic gym a few blocks from us that holds these sort of talks every day, with mega stars like Hillary Clinton or Neil Patrick Harris, same level, right? shut up, I love NPH SO MUCH!). Aaaaanyway, we got there early and we were the first in the premium tickets line. Met my friend Carolina there and we all set up in the first row. YEY, score!

So, here’s a few notes my phone took, because, MEB.
–Because of the war, they moved from Eritrea to Italy when he was ten, there’s no running there, so he played soccer: In Italy, they called me Pele.
–Talking about goals and how he’d been able to stay competitive for s long: I am really looking forward to May 6 when I turn 40 and no one is looking for me to do much! No more pressure!
— He talked about injuries a lot, how anything bad that happened was there to make you work on that part of your body/training so you could come back stronger: Experience is the best teacher there is.
–He also talked a lot about the importance of plyometrics, and how not even elite athletes are doing enough of them. He thinks that’s what sets up him apart, how he’s always thinking of new ways to work or stretch his body: When was the last time you went backwards?  (little sidenote, I was the only one who said “today!!!” Patricia and I had done plyos that day and we run backwards a lot, if you need help with these, here)
–Talking about pre-race rituals: “90% of training is physical and the 10% is mental. On Race day, it’s 90% mental. There is a lot of decisions that are made on the course and you have to be prepared, look at your competitors form, check their breathing, know that their flaws are...”
–When asked if he liked to run with other people: “It’s hard to train with other runners because there’s always drama. Sometimes they want to drop you, sometimes they want to push you, I gotta keep watching my watch! But what happens in Flagstaff stays in Flagstaff”
–When asked what was his favorite marathon: New York City.
This man is so so inspiring… he talked a lot about the hard work it took for him to get over every single injury, hours and hours of PT, you know, things we might not have the patience with… all over OVERCOMING.
Jordan Metzl was there too, with his doctor point of view and his message that exercise cures everything and every doctor should prescribe more of it, which, you know, I agree with 500%  HELLO
And, emmm, Malcolm Gladwell was there… I had no idea who he was (shhh don’t tell him) though his name sounded really really familiar. I have to say, now, I am OBSESSED with him. He’s super funny. Funny and Smart and funny AND smart…! and a Runner obviously, so I’ll have to go check out his books ASAP. or in YouTube or whatever, anywhere. I might start stalking him. He is amazing. I might buy him a sweater.
The host/moderator was great too Jacob Weisberg, probably the best job I’ve ever seen anyone do at something like this, no lulls, no awkward moments, all fun and friends. It was a great night!! PLUS, I was in bed by 10!
Get their books people, they all seem worth it!!! 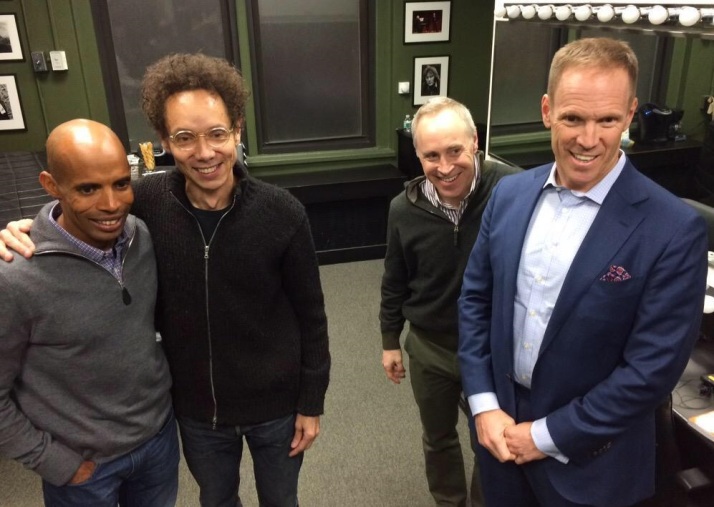 12 thoughts on “Gossip from Meb -from the #RunningStrong talk”