You might have already read the NYCRuns Brooklyn Marathon and Half Marathon RACE REPORT… but here is the VIDEO!!!

So, the world premiere…

Here is a pic of the finish line which comes right after the video ends! 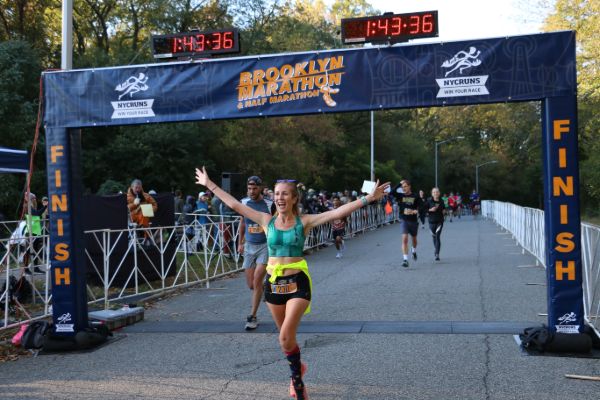 So last week I run the Brooklyn Half for the first time! This is not the NYRR Brooklyn Half in May, this is the NYC Runs Half AND Full in November. The race has been happening for a few years but this is the first time that it ventures out of Prospect Park which is quite exciting -more exciting than a bunch of loops in Prospect Park. To some, the loops are what makes it great, but we’ll get to that later. (video of my race is HERE… don’t miss it.)

The full and the half start together, in big corrals, with portapotties inside the corrals, at 7 am. It starts in front of the Brooklyn Museum, which is a good location, as there are wide streets and easy to get to via transportation. The wait was fun even though I may have not have known as many runners and I am used to…!

Luckily, I had Nick!

Here is a quick look at the 2019 Half course, with its course elevation profile. 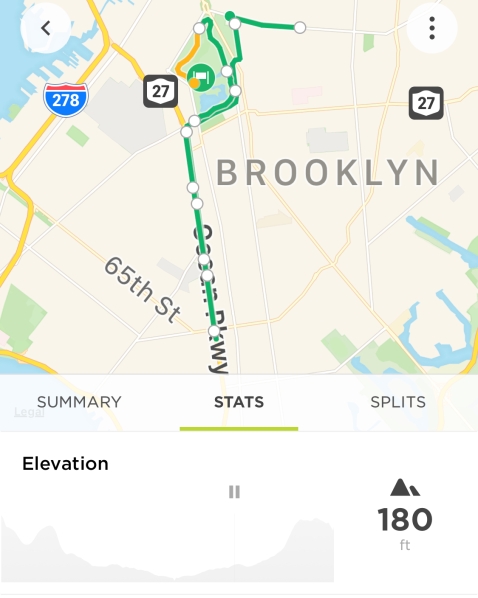 and here is the official race map for 2019 with also, the elevation profile:

Miles one and two are a fun turnaround which almost doesn’t count: that’s where you will warm up and get your legs moving. hey everyone! Miles two and three you coast by the park, trying to get to race pace and soon, by mile four, you’re heading out on Ocean Parkway on the second out and back. The out is on the downhill side, with a little upside on the other side. The halfers and fullers turn at different points (about 300 meters more for the halfers) but it’s quite seamless. And yes, there is a timing mat on the turnaround, yippie! The way back is a bit on the hard way… that’s miles seven to ten and it starts getting hard now. Luckily, the return to the park makes things exciting, and now you know you’re in the home stretch. Well, sort of, first, you gotta climb the Battle Pass Hill at mile eleven.. which seriously, if you didn’t know it was coming or saved any for it, well… it’s on you!

After clearing that monster hill, not because it’s that scary but because it’s on mile eleven, you just slide down the rollercoaster hard and get to the finish line. The last mile is downhill FAST.

the medal is pretty rockin

Now… I don’t know what I was expecting. Probably a faster race. And by faster I mean, flatter. There was not a lot of flat, so not quite super fast but I actually really liked the course. It flew by because it was different but also had a feeling of comfort. We’ve all run in those roads at some point or another and it looks more like an upside-down version of the nyrr bk half.

Now, what’s different… The race shirt was meh (I didn’t like the material and the v-neck), but the rest was awesome. The race swag was great, you get lots of goodies, the medal was awesome, they give you a neck chief at the finish also, plus the water stops where very well staffed and run. I liked it. I’d do it again next year.

video of my race is HERE… don’t miss it.

Also, this is how I did, in case you care:

I like these stats. It shows you the negative split. It also shows that even though I speed up 8 seconds per mile on the second half, people passed me… WOT? I liked it, I’d recommend it, It was a bit crowded on the first two miles but probably my fault for starting back a few corrals int the middle of nowhere. Also, the weather was perfection: 43, and bit sunny, no wind. Ended up taking my long sleeve shirt off at mile 1 and running on a bra. fun times. LOVED IT.

Pen it in for next year. Video of my race is HERE… don’t miss it.

Questions? anything else? see you soon on the next one!