Well, I’ve written about this race SO many times, I am sure you’re sick of it. It’s AWESOME. Take my word. Or go see the NYRR photo galleries here

From their website: “more than 5,600 runners, walkers, handcyclists, and wheelchair athletes arrived in Central Park to take part in one of the most powerful events on the New York Road Runners race calendar. Many participants in today’s race were part of Achilles’ Freedom Team of Wounded Veterans, a program that provides athletic training and specialized adaptive devices, like hand-crank wheelchairs, to wounded members of the U.S. military. The long-term goal for these athletes is to complete a marathon; along the way, they hit smaller milestones, like today’s Hope & Possibility four-miler.”

anyway,you get a great idea of what race looks like in those pictures right?

My race was quite uneventful. I run there with Carolina, IT WAS SO HOT. I was ready to run back home after 1 mile… Race also starts at 9 am. I wish it started at 6! which was also hot but at least I would be back home in the shower earlier…! 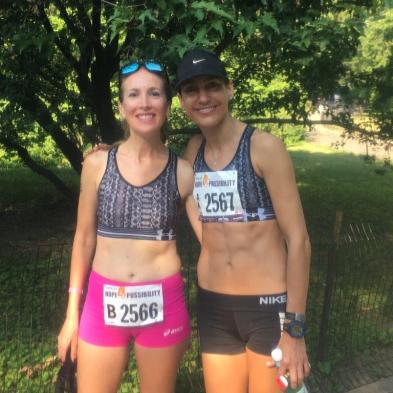 gosh we were so hot, we stopped at the boathouse to throw water on ourselves!

I saw Dan and Phillip on the corral and they were going out faster than me, and I, at the point, was still so hot I was wondering if I should even “bother”. You know? Can I dial it down a bit and just take it easy? UGH. I started conservatively and decide I didn’t want to die at the end. Mile 1: 7:13. it’s funny because I NOT even once looked at my watch during the race. I just totally forgot about it. Weird, right? Christine found me going up Cat Hill and then Dan and her took off. I felt so lonely! Then luckily I saw Juan on the course!

He had finished his run and was just cheering me on. So happy he was there! Mile 2: 7:01. Mile 2 is always the fastest. If I had looked at my watch I would have known there how slow I was going. Glad I didn’t look. I just tried to keep going. I felt thirsty since I started but at the water stations I just threw water in my head. It really helped. Back on the west side, and there was Juan again!

well, it wasn’t a PR by a LOT. final time was 28:43 but I finished in one piece without feeling like i’d throw up. That’s a LOT in that weather! 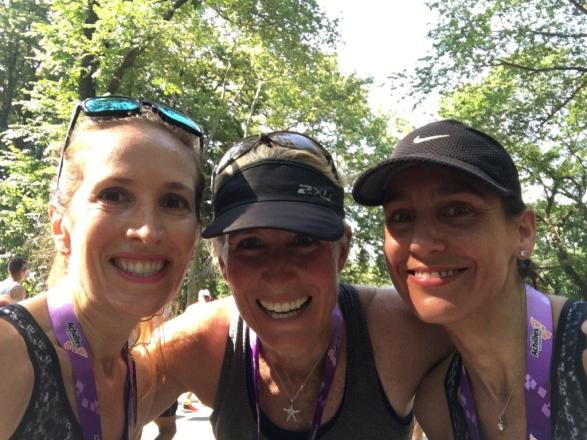 Sweaty Elizabeth, Christine, and Carolina at the finish

Then Juan showed up, we had some water and walked back home. We re-did last years shot just because we totally coordinated our bras, yes on purpose. 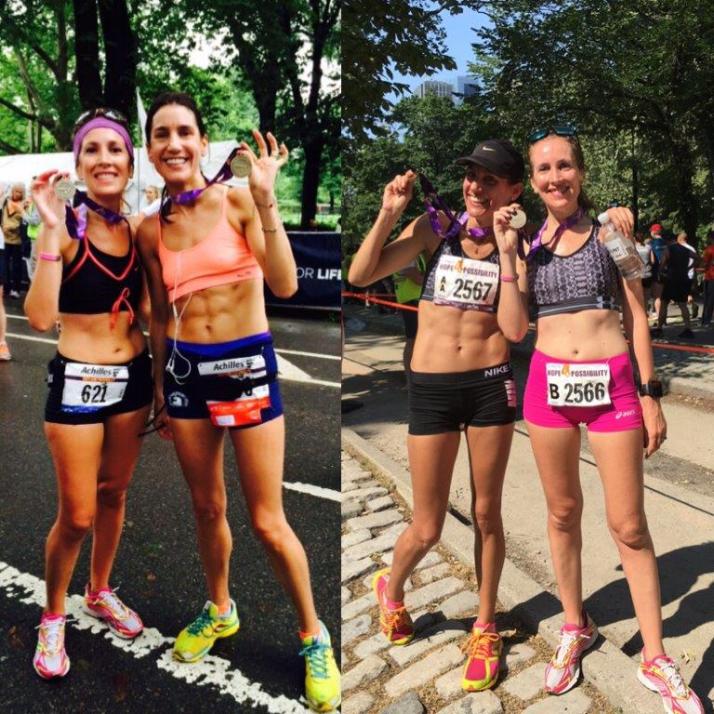 I had given my abs an ultimatum to show up after this picture last year. They didn’t hear me AT ALL. Losers! Not like I did much about it… eeeeek!

Also, let me share a few pictures from Saturday’s race, cheering at the Front Runners Pride Run 5 miler with the Dashing Whippets. Cause they’re fun.

That misting station on the back looks amazing!