this was a crazy week, not like they are ever quiet here. But, since last Sunday my stomach has not been doing so well. I think I have a stomach virus, quite disgusting to give you any fun details, but I’ve been trying to calm it down until it goes away. All I’ve been eating since Sunday is that liquid white rice nonsense with parmesan and more parmesan on it. Oh and black tea. YUK. By Tuesday, I had lost 5 pounds… UGH. I still did do my speedwork, because HEY, but I felt like I was gonna pass out with each interval. AWFUL.

that’s the bunch of us after the workout. I did what I could, which I still think was pretty good. 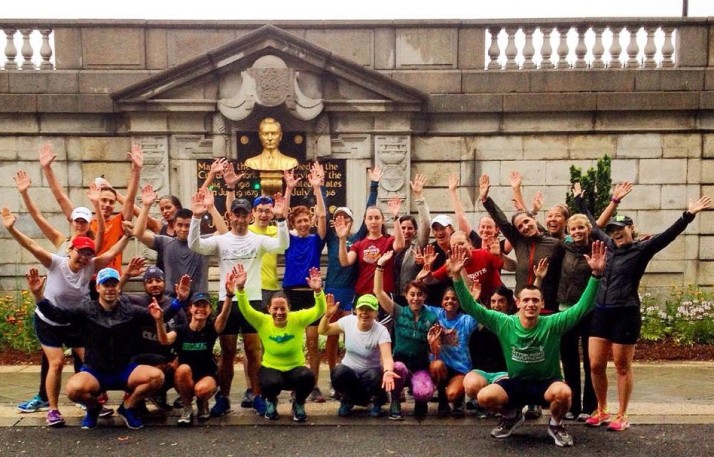 Those pictures at Engineer’s Gate never get old! Anyway, I’ve been stumbling around through the city, dizzy and week since Sunday. WHAT A MESS.

Wednesday, we set out to have a cool NATIONAL RUNNING DAY run all over Central Park. Carolina and I started at 6:20 am at NYRR. They had LOTS of food, but hey, that’s all poison to me. My stomach grumbles even with water!!! 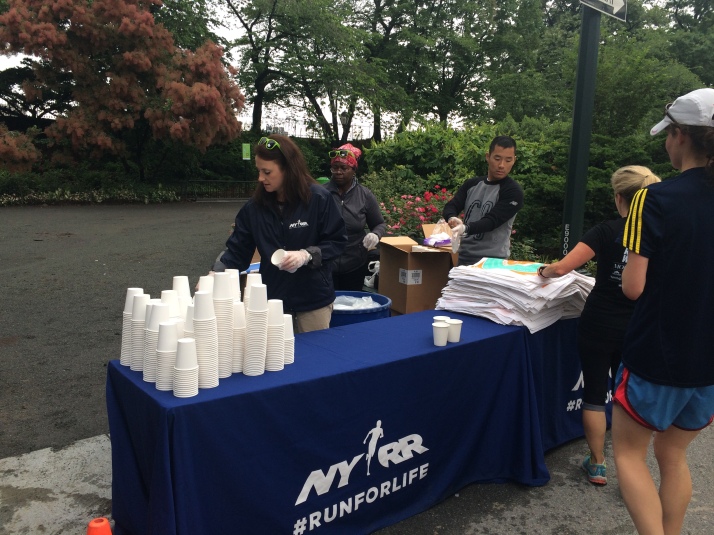 At Engineers Gate, there was a NYRR section, with Peter Ciaccia, bandanas, and other cool stuff!

we are SO creative!

I really have no clue what to do with a bandana. So I gave it to a runner friend, hey Mo! 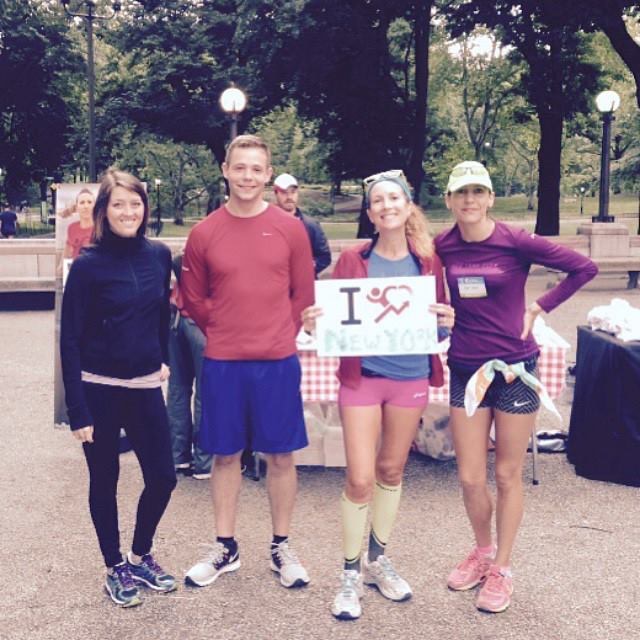 We then run over to Columbus Circle, as Charity Miles was set up there, with lots of cool stuff too, plus their Timex friends, and cupcakes (yeah, well…). We set out on a run with them too. Do you use Charity Miles????? It’s a GREAT app, you turn it on when you run, select a charity, and they give money to your charity for the miles you walk, run, or bike. I don’t run much with my phone but I do use it when I  do errands, and it really adds up. I work for one of the charities they benefit, and I am the one that receives the check at the end of the year. It really makes a huge difference on our end!

Thursday, after my run, I did pilates. You all know I don’t cross-train. I tried sooo many things and I pretty much hated everything (remember SoulCycle? ha). I thought this was fantastic!!! Stefanie Gordon, the Pilates instructor, is a former Division 1 runner for the University of Delaware and was introduced to Pilates after numerous injuries left her unable to train. She now works primarily with runners and post-op patients. You can reach her here: [email protected]

Okay, if I am ever going to try something like this, of course I’d go for someone like her, right? Her  practice is right off Grand Central Station which is AMAZING to me… Lots more info on Stef here.

You know me, you know I really thought I was gonna hate it. Actually Tracey, on my run yesterday morning, told me ALL the things I’d hate about it.

I actually really liked it. I don’t know if it’s because Stef IS A RUNNER or what. We did a lot of stuff with the muscles we runners need to work on, and the ones we don’t work on. I found it very challenging but as soon as I noticed it had been an hour… WTF! it went really fast. I like that she was pointing out my inefficiencies, and those machines are pretty amazing. To tell you the truth though, this is not stuff I could do on my own, at home, or without coaching. 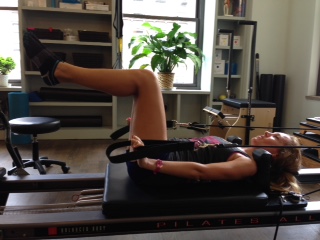 Somehow I am not destroyed one day later..??? All really weird. If I had drunk anything in there, I would tell you she gave me some magic potion. Oh, then she foam-rolled me at the end, it was amazing(LY PAINGFUL!). Guys, if you have some sort of inefficiency, weakness, are looking for some cross-training, just go see her! THANKS STEF!!!!! 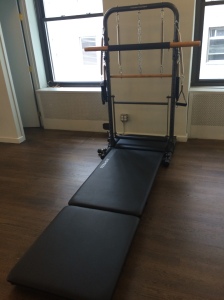 I didn’t get on this one. Looks scary, right?

Next up, the NYRR Retro 4 Miler this Sunday ASSUMING I have enough food in my to race. I am still eating very little and loosing weight, so we’ll see. It’s a “retro” themed race but I can’t find any vintage gear!!! And this headband is SO tight on my head, I could barely wear it for a minute. Apparently, I have a big head…!!!!!!!!!!!!!!!! 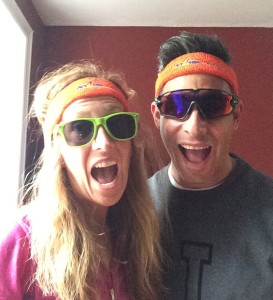