Hey friends! Someone is in a GREAT running mood… I was dreading last week though.

I was starting my long runs, I was slated for 14 on Saturday and you well I can’t run long by myself… the week before I had run 12 with team mates but this past Saturday EVERYONE I knew (EVERYONE!!) was doing the Team Championships so I had no one to run with. So sad-Elizabeth face all over the place. What am I gonna do?? I can’t do 14 by myself!!! I moaned around for days.

I even thought of running the 5 mile race, adding a few before. But, after the tempo we did last Tuesday I knew I wasn’t mentally ready to race and that also I didn’t want to miss Summer Streets!!! Summer Streets!!! In case you don’t know, we get a whole street blocked for us, just 3 Saturdays a year, Park Avenue in the Upper East Side all the way downtown, 7 to noon. I can’t miss it. Look at the wonderful pictures I took last year. It’s just the THE BEST.

Anyway, Jessica, told me she and her friend were doing also a similar amount of miles at a similar pace, so we decided we’d meet early to beat the crowds and be at 72nd (where it starts) St at 7 am.

Saturday 6:21 rolls around it’s  pouring. Jessica and her friend bail and I had no idea what to do. I couldn’t do it later as I had a whole day planned (Cirque du Soleil included) and working at the NYC Tri the next day. It was then or never. I pout. The rain didn’t scare me but running alone for so long did. Ugh. I kept pouting. Poor Juan was trying to motivate me like he was on commission!!

He was doing Team Championships too so he was having breakfast, I kept pouting. 5 minutes later we both dozed off!!!!! Eeeeek, we woke up at 8:20!!!!! We had to rush to make it to the race start (he barely did!! had to start at the back!), I threw shorts on and headed out. F this! I am going anyway!

There was no one there. I had the whole Park Avenue for myself. The rain felt nice too and after a couple of miles it had stopped. I was barely wet and very comfortable!

By the time I hit Grand Central, I decided to check out the Park Avenue Tunnel. There is usually a loooong looooong line and I hate lines. No line!!!! 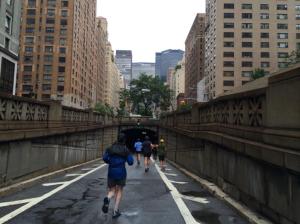 The complete darkness was so amazing. I love running in zero vision, it’s the best feeling, it makes you feel like you’re flying. FUN.

Back out on the other side. I just love these sights. Mostly when it’s all empty.

Getting to Union Square 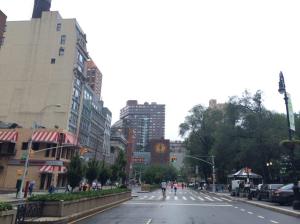 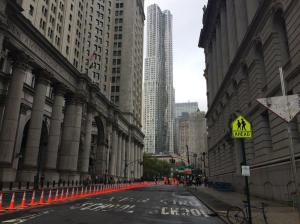 Soon I was all the way downtown, by Foley Square. I forget how short the city is. it’s probaby 4.5 from 72nd to the Brooklyn Bridge. I tried the bridge but it was, as usual, too crowded for my taste. So I headed back up! 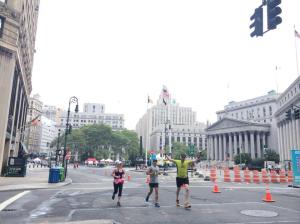 These water stops are my favorite, I love that I don’t need to bring anything! A girl at Bicycle Habitat gave me nuun pills, a guy a bottle water: ha! magic!

As soon I got all the way back up to 72nd I noticed I still needed 4 more miles so I went back down again. Weather looked perfect now on Park Avenue. 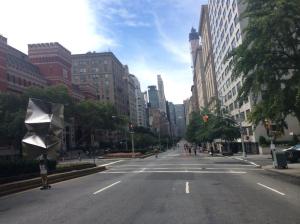 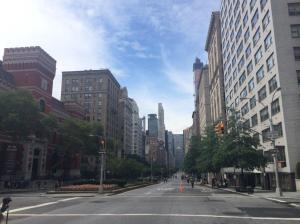 Running back on the Upper East I noticed there were people trumpets on EVERY BLOCK. Sometimes 2 or 3 per block… all playing one note. It was the weirdest thing… As soon as one of the would not be playing, I’d ask them what the deal was but none of them would tell me what the deal was, they’d just point to their hats that read “trumpet city”*, after a bit they started playing. It was so cool to have a soundtrack at MY speed… ah nyc!!!

Anyway, the main thing here is that:

2-  I had a FANTASTIC time (thanks NYC for being so OSOM!)