I had run Saturday (Summer Streets!!) because I had work on Sunday!!! wohooo, there’s a whole weekend of waking up early! 😉

Great thing was that Juan was volunteering at the finish line so we both took out early as we had to be within a few blocks from each other at the same time. When we left the apartment, it was pouring. We walked almost 2 miles, trough a deserted Central Park. It was so romantic!

The whole finish area was all set up quite early on.

Soon, by 7 am, I was all set up at my cheering. Very soon after, still in pouring rain, with very few cheerers still, the leaders go by. 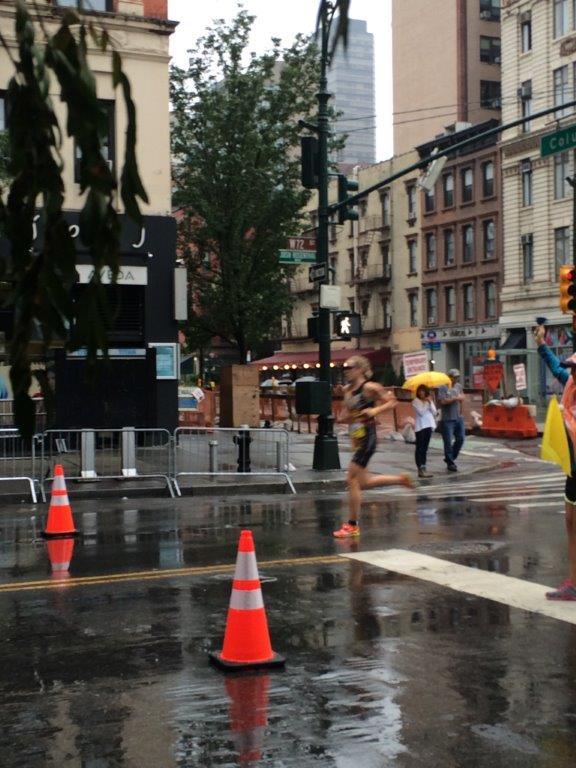 That’s the first woman and men til that point. Soon they were trickling in and by 8 am it had stopped raining. Nothing worse than wet jean, ugh.

In a bit, I had a few of my athlete’s there, and their families had come to join me (I had promised them lots of cheering supplies!!!), so it was a lot of fun. Also a lot of my team mates and friends came by. This area is great to watch because you walk 3-4 blocks and you can see them again, and the finish line is right there, pretty convenient!

Finally we started to dry off and soon we had everyone running by us. I spotted many but I only managed to get pictures of just a few. I get so fricking excited that I start yelling and I forget to shoot, OR… I remember and I press random buttons (I deleted a few apps thinking I was taking pictures…). I am a mess. But I scream a lot!

Another Whippet go by fast, Patricia, who looked so super happy!

Erin, one my Team Up athletes had also a super fun time. She put together this fabulous video if you’re interested in seeing more of the NYC Tri. 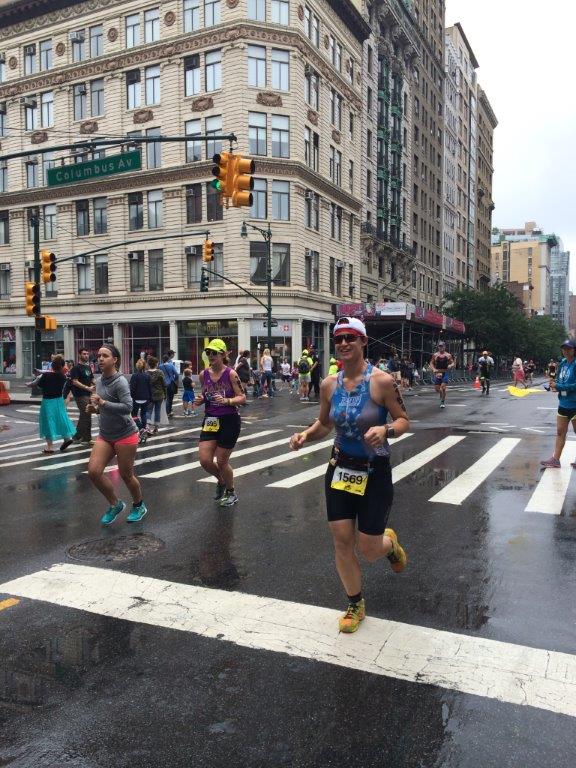 Below is Xavi, another team mate. This was his first tri. funny thing is, most of the Whippets you see racing the tri, did a hard 5 miler the day before, the Team Championships. I am not sure how my body would handle back to back racing, but more kudos to all of them! 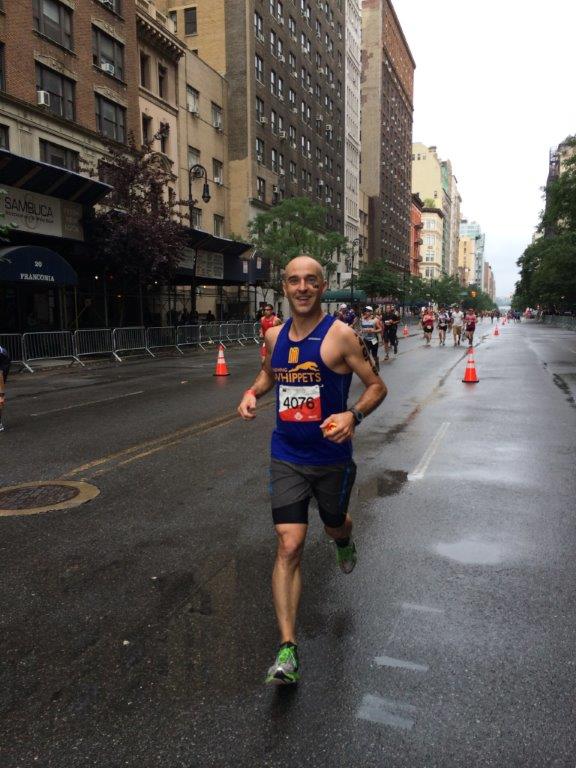 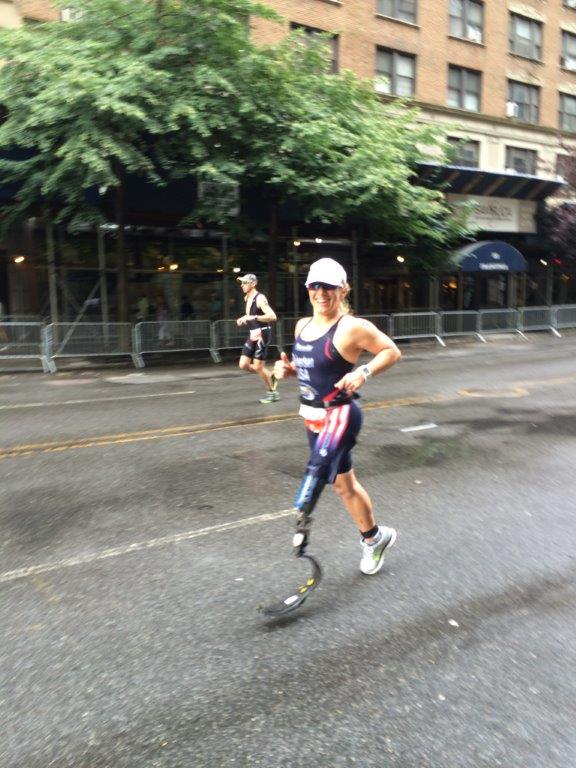 Then I got closer to the finish line, to see if I could double spot some people, soon I saw Jason again by the finish turnaround!

And the hubs was there working… he had to monitor the crossing… people would cross the course right when you had 150 meters to the finish and were on full sprint-on mode. that’s one crazy spot to have a crossing.  Juan had to do 5 hours of that. I would have been dead-exhausted after 1 hour of that… 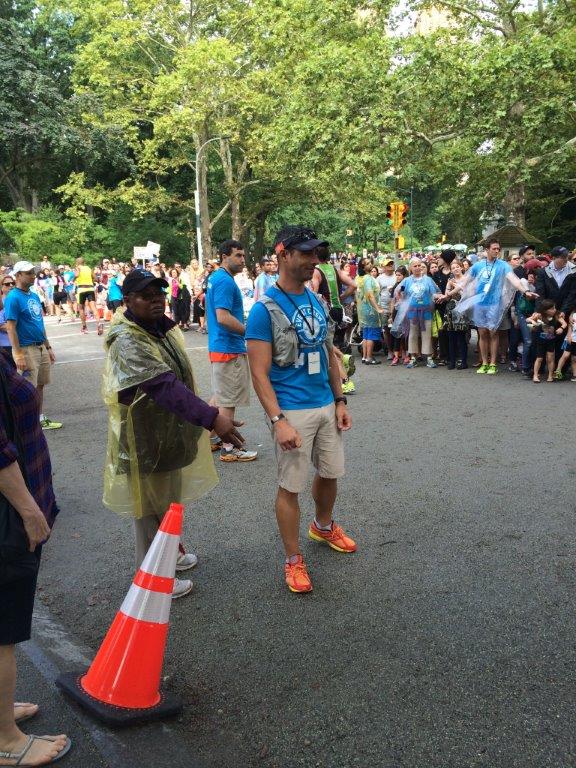 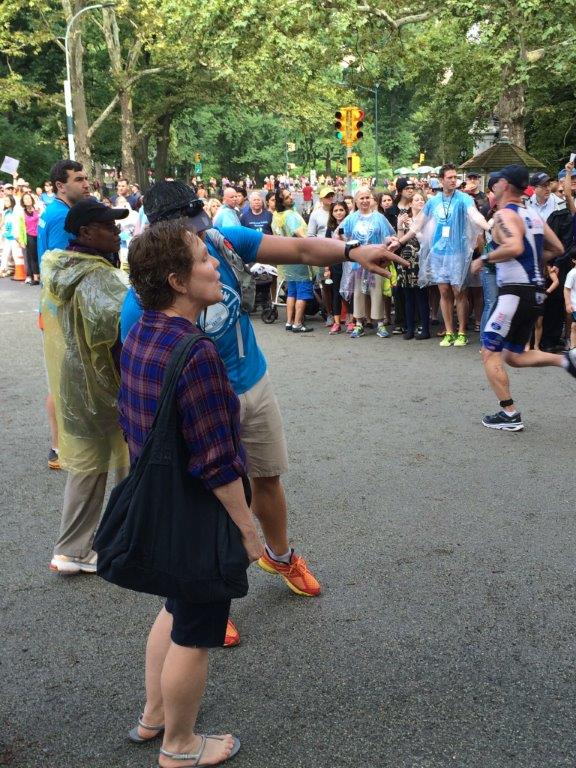 By then, I realized I needed a sip of something, so I went towards the VIP area right on the finish, got some water and a banana and a yogurt, got some shots and kept going! 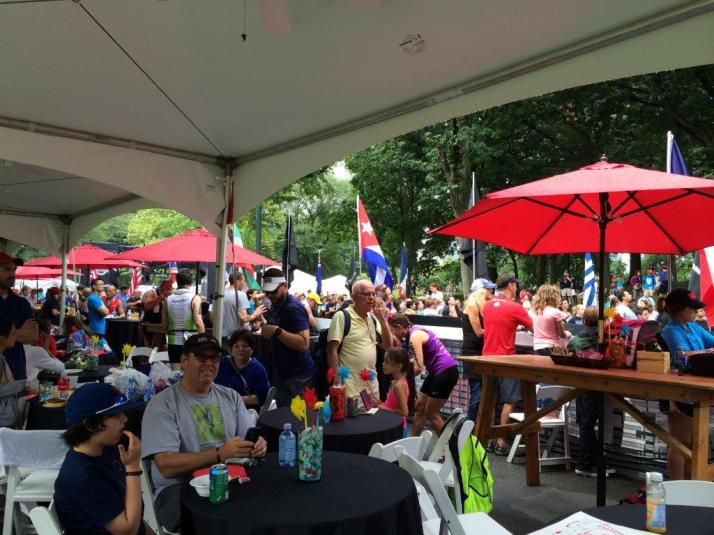 That’s one comfortable way to be close to the finish line!

Back at the 72nd transverse, there’s Kino again! And Juan’s arm. 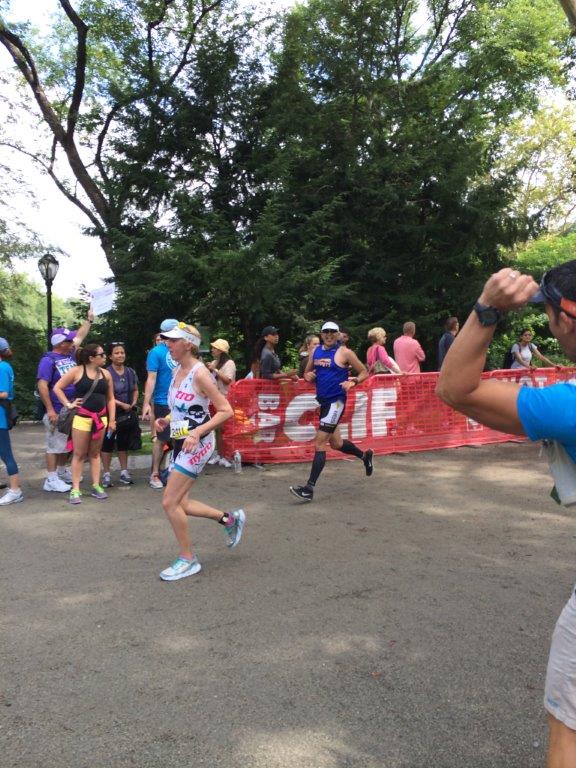 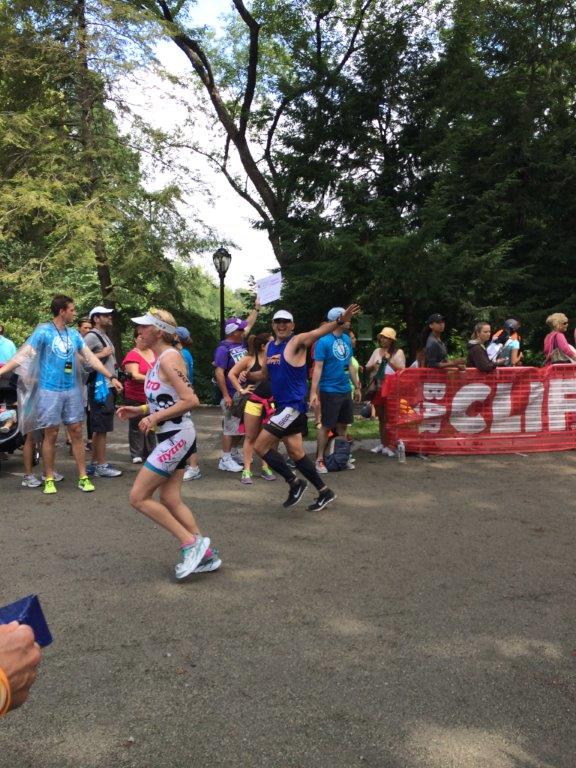 I had spotted one of my athletes so I went to the finish chute. Found Kino first with a friend. 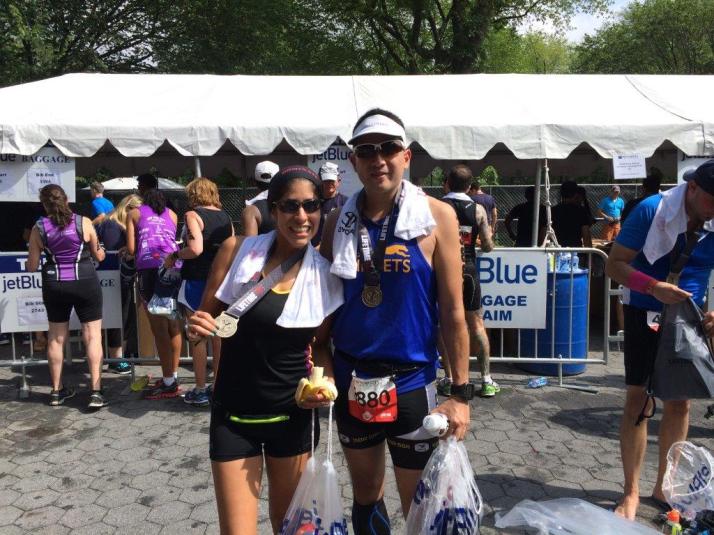 And Xavi with his medal and his flag!

The other side of the finish line! 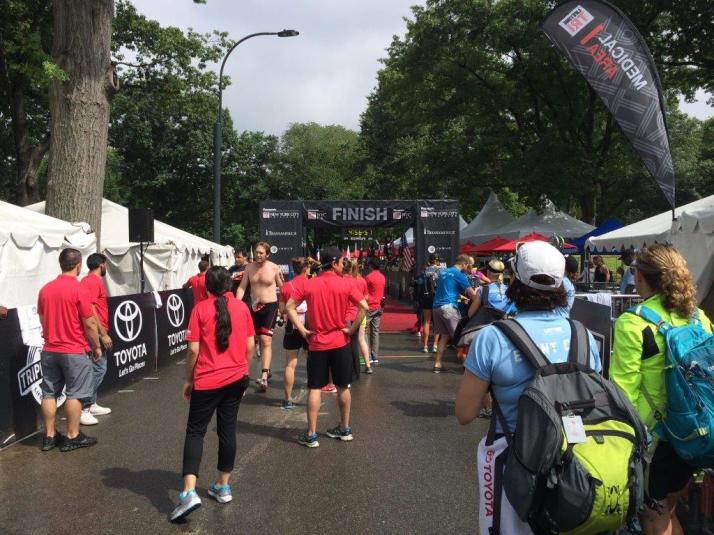 I followed another one of my athletes, Sam and her family and two friends, to the finish festival, which was bopping!!! Found the other Sam and Jason, eating ice cream and discussing the water in the Hudson, of course. Congrats guys! 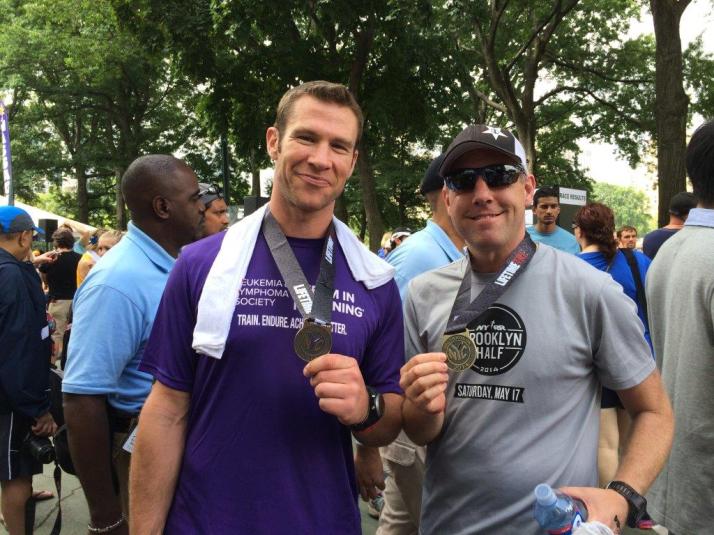 So… I snagged one of these, salted caramel, and it was delicious. I just thought it was hilarious it had the same name of my boyfriend Bart!

So, now I had to wait for Juan to be done with his volunteering, 5 hours of it, so we sat down. I think I had an apple. Aaron and Sam.

Soon enough the husband was done and reported back to service! I think that’s Michael in the back!

We decided to hang out a bit more as three of our friends were getting a prize award for the co-ed relay team! Congrats Simon, Katie, and Michael!!!! 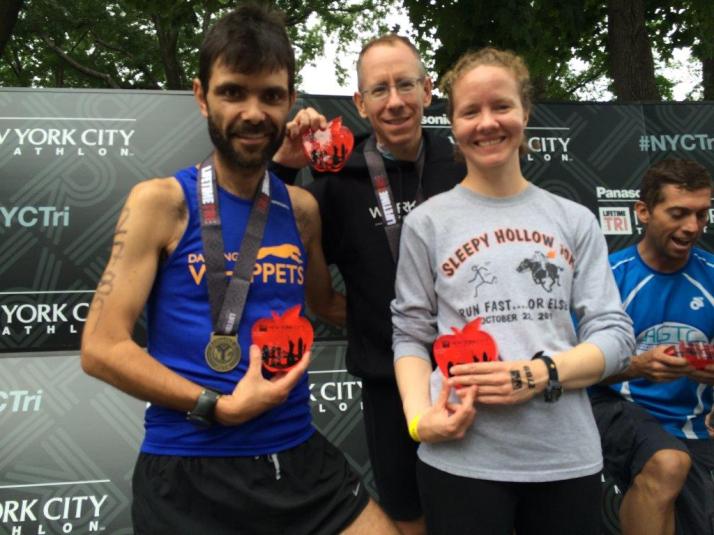 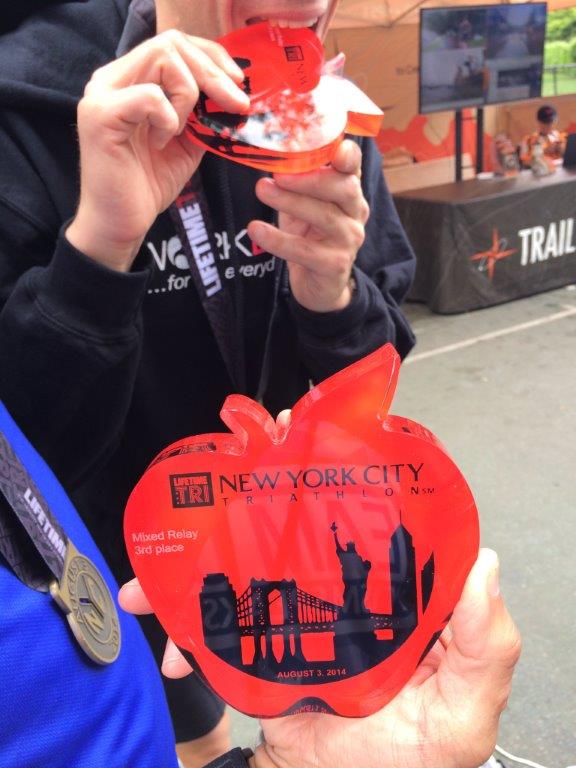 Well, that was a fun day! And probably the best weather they’ve had IN YEARS… the current was strong and saved everyone a few minutes and the rain kept everyone cool during the run, but the bike portion was a bit messy. Still, for what I heard, everyone had a great time out there!

One thought on “2014 NYC Triathlon in Pictures.”