Last weekend I run the All State Hot Chocolate 15K and 5K (I run the 15k) in Prospect Park, Brooklyn. This race is held annually in about 20 cities all over the US. I hadn’t heard about the race until about a month before but it looked like fun and a great workout: THREE CLIMBS up BATTLE PASS HILL during a race is no joke, so I was clearly in.

Bib pickup was in Brooklyn which for many of us is.. meh… Weekday day bib pick up from 10 am to 7 pm is HARD. And there was no race day pick up. So I left the office at 5 pm, headed to BK to pick up my bib before schlepping back up to the Upper East Side on a Friday when someone got sick on the Q and we were stuck on the Manhattan Bridge for 40 minutes… then the trains changed lines at Atlantic… by then it was 6:40 and I was freaking out. Everyone was trying to grab an uber so it got super congested on the street. Luckily I found a cab and got to the bib pick up at 7:10, sweating and frustrated, but all was good. They were still open, they had a bib for me AND A REALLY COOL RUNNING HOODIE THAT I INSTANTLY LOVED! yeah, it’s really cute and I have no pictures! Got home at like 8:30 and quick to bed because…

Problem #2 was that the race was starting at 7 am in Brooklyn… so I had to wake up around 4. GREAT.

Transportation this time around was easy and relaxed, got there early, found friends easily and it was a really fun atmosphere in the park. Soon enough we were at the start, ready to go.

The 5K and 15K were starting together. Which is awesome and also confusing when you’re trying to run with people… The 5K runners will start picking up the pace at mile 2 and then with 800s and 400s meter to go and you can’t (shouldn’t) follow… But the more the merrier at the start.

We got moving and I counted about 13 women ahead of me. WHO IS RUNNING THE 5K, please? It’d be cool if you would all write that int the back of your shirt!!! No?

The first hill was on mile 1 so it was out-of-the-way quickly… The weather was fantastic, lows 50s and overcast, amazing.

Did I mention free pictures? There was not more than 10 people cheering/spectating, given it was so early and in Brooklyn… so I kept entertaining myself with the runners ahead of me and the photographer… and the tangents of course!

We were also passing the 5K runners at some point on the second and third loops, which was really fun so we could all encourage each other. 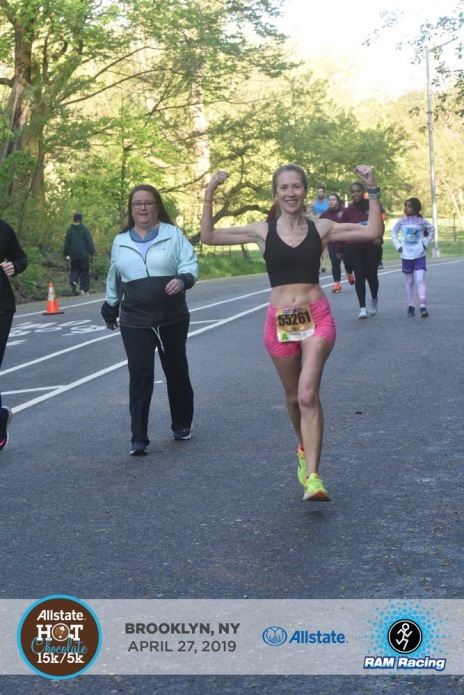 After the 3rd time I hit the hill I had no idea how much mileage I had left and for a few minutes I was freaking out that I had missed the finish line turn… Yes, I could have looked at my mileage but I don’t ever look at my watch while running…

I did have fun and it’s quite easy to run fast on that course and that weather
Soon enough, I was done. 1:10:19, 7:33 pace. About two minutes slower than my PR. 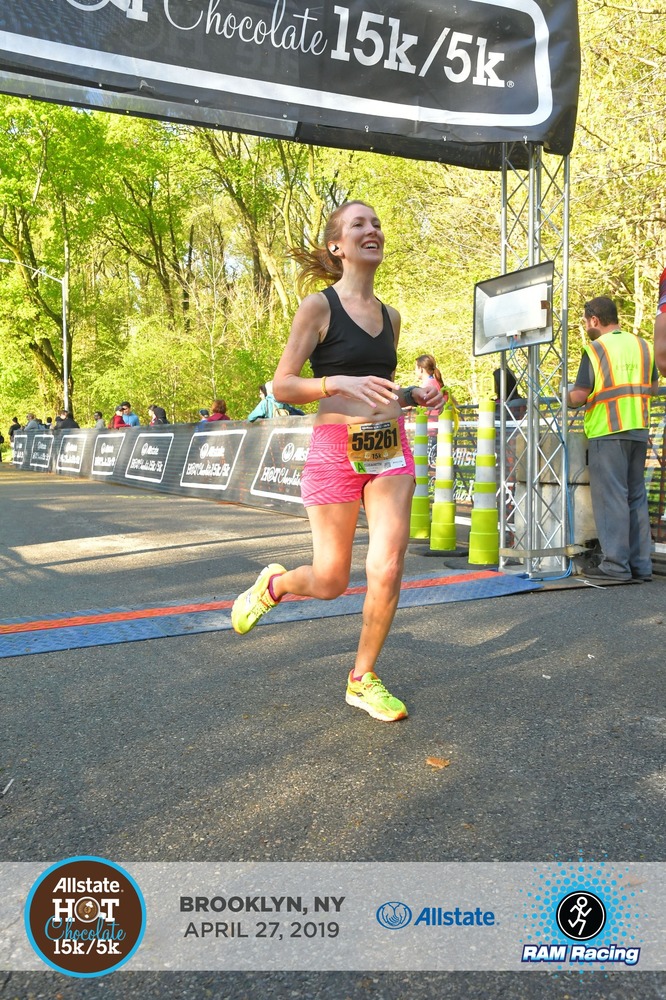 This medal is INSANE.

We got to the finish line area and they had ALL SORTS OF CHOCOLATE SITUATIONS happening. It was amazing. 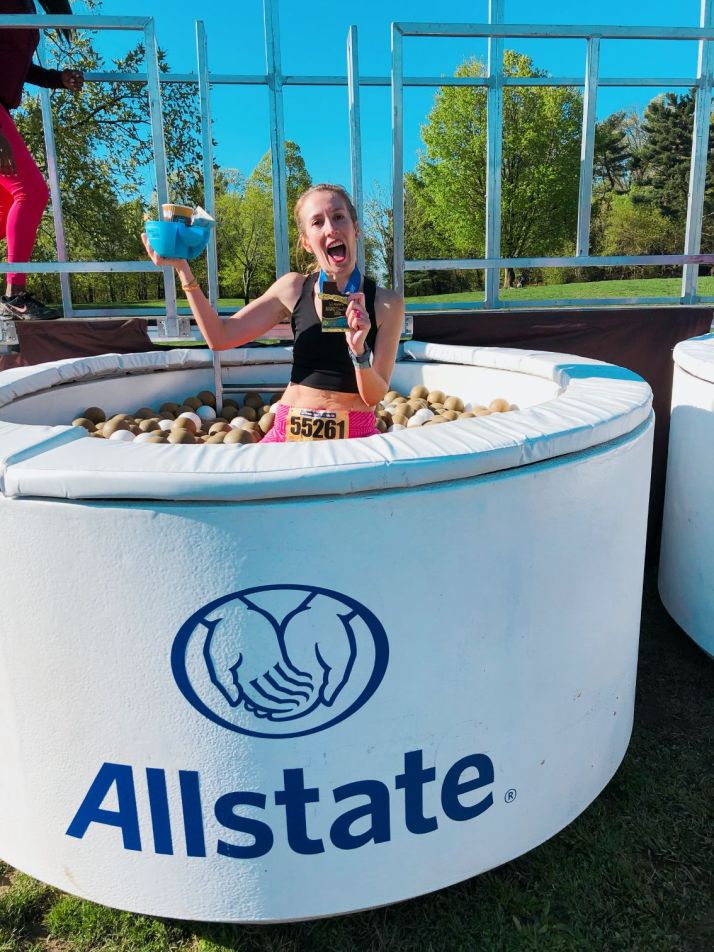 Now in case you are curious or as usual want to admire my negative splitting capabilities, here is a bit of the pacing:

I came in first in my AG which is cool, and 7th woman… it was really nice to be able to chase some people down in the last 2 miles. In smaller races, you have no one to chase and in bigger races, it is really hard to pick someone off the hundreds… this was the perfect middle ground.

The organization was marvelous. I would do this race again next year in a second. And I would ask anyone else to pick up my bib in BROOKLYN!