In case you forgot, I had raced (and WON!) the Alive and Running 5K last Saturday (as if I could let anyone forget!!!), then on Wednesday I raced the Al Goldstein Summer Series 5K and got a medal for 1st in my AG and then… Sunday, I showed up at the Harlem United One Miler… I wasn’t sure if I’d be recovered from the last two 5ks in the last week but  I really wanted to support my friend Allison who was working really hard for this event. I invited everyone I could to could help with the turnout; plus, the more the merrier, right? A mile is always better with friends!!!

The race was a loop and a bit around Marcus Garvey Park, the little green memorial we circle on mile 22 of the NYC Marathon, still Juan and I run waaaay past it on our way there… We had to turn around and got a bit lost… I think the 92% humidity got to our heads, and I had about 3 miles in me before the race!!! That’s a GOOD warm up!!! ugh.

When we finally made it, there was already a nice crowd, got our bibs and spotted Daphne after a bit! 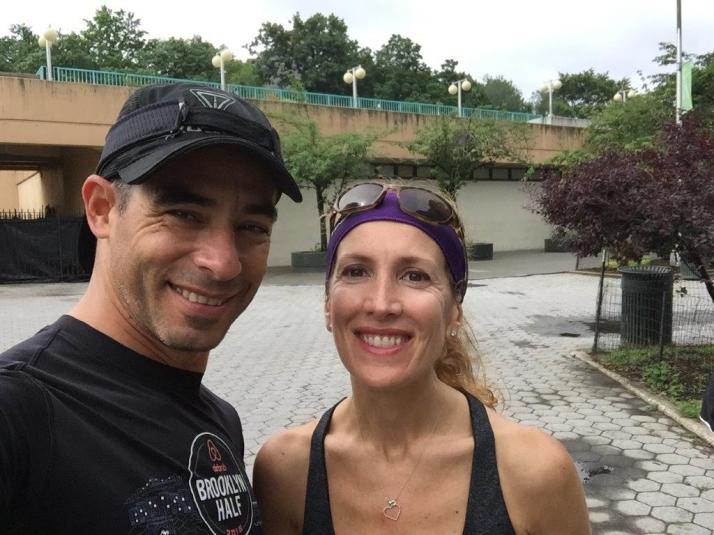 Juan and I, never giving up on selfies, though they SUCK

Check out the shirt on Lesley’s boy. TOO AWESOME!

Daphne and I, photobombed! LOVE!

Anyway, the men were racing first, there were some pictures, then about 60 guys lined up (I have no idea, I could have been 40 or 100), I only knew Kevin in the race, and he ended up winning it. By a lot. #BEAST.

Around 10:30 am, as soon as the sun goes out of course, the women’s heat goes. Lesley, who is a super fast runner says her husband did 5:17 so she should be around there. I made a mental note to not even look at her back. Obviously. My fastest mile was 6:05 and that was a week before my 3:27 marathon. I am NOT in 6:05 shape so… Stuart said I’d do around 6:15 or 6:20 if I remember right, but I just wanted to see where I was, didn’t have much expectations. Plus, I had two 5Ks still in my legs weighing me down a bit. Oh, and it was 91% humidity, did I say that?

Soon enough we get moving to the line and the gun goes off. 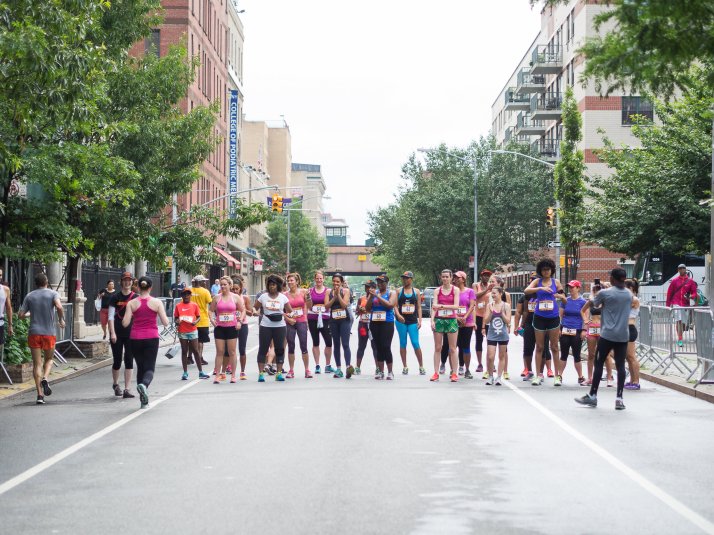 I see a LOT of women take off (as usual) and I just focus on my pace (as usual too). Lesley was flying, the rest… too early to tell. A minute in, I knew who was going to come back. And there’s Juan before the corner taking pictures!

that was the front of the race at about 200 meters in, Lesley in white, literally flying, a girl in long tights, and Deirdre chasing Lesley in the pink top

See how far behind I was??? I am not even kidding when I tell you I don’t go out hard and focus on my pace. It’s hard to tell in those first 60 seconds who will stay ahead and who won’t, so just gotta RUN YOUR OWN RACE!

Obv I see my husband and I smile. check behind me, pink top and black shorts, is Daphne, who is also running a smart race as she’ll finish right in the same place with me! 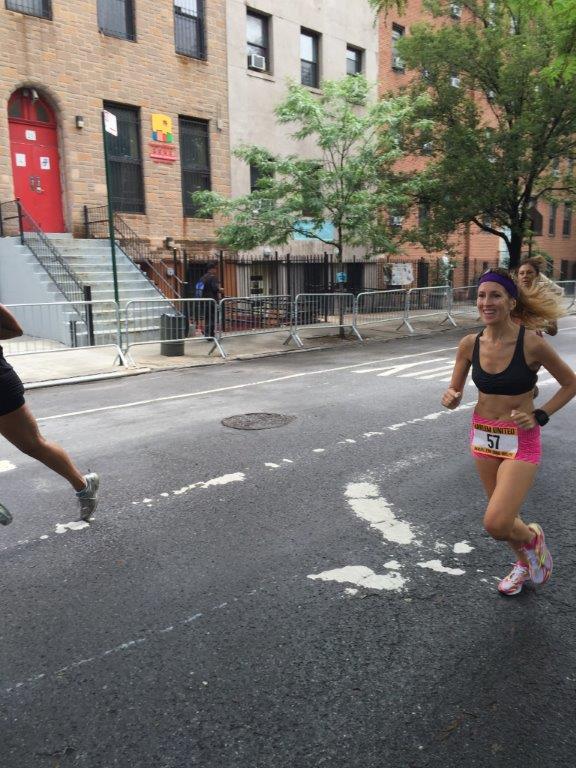 No, Elizabeth no, you’re NOT stopping for a kiss here, don’t do it!!!! SOOO Tempting.

I cant remember much of the race, so I have no idea why I am smiling, with so many people getting away from me…

Actually, I love the old buildings around this block. there was a super nice building by the start with flowers… I should have taken MORE pictures!

Then we turn, we go by the finish line and keep going. I think by then I had passed two women. As soon as I turned on 120th st, I had passed one lady who wished me luck, so sweet, I had close my mouth,  swallow and wish her luck too which was REALLY hard. On the next turn, on Madison Avenue, I saw only Deirdre and Lesley were ahead of me, by A LOT. Deirdre was about 15 seconds away, so there was no catching her. Lesley was barely a little tiny speck waaaay ahead. I had no idea what was happening behind me and couldn’t really look (stay focused) but I didn’t hear any one close at all. I get to the corner of 124 where we turn left again and there’s an ambulance parked there… no tangent: damn!!! that’s when I started to push a bit more, with about 600 to go. I turn again towards the finish, clench my teeth, look for the fifth gear… and NOTHING. NOTHING nothing. I felt so flat the whole race… My legs were pretty ok but there was nothing in my lungs to use up at the end, as I always do. Oh well. 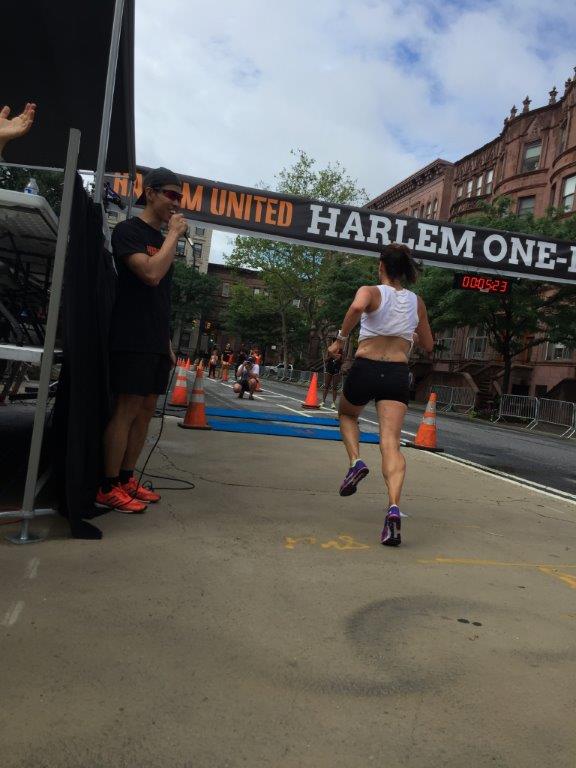 Juan was by the finish taking these pictures obviously: Lesley winning in 5:24 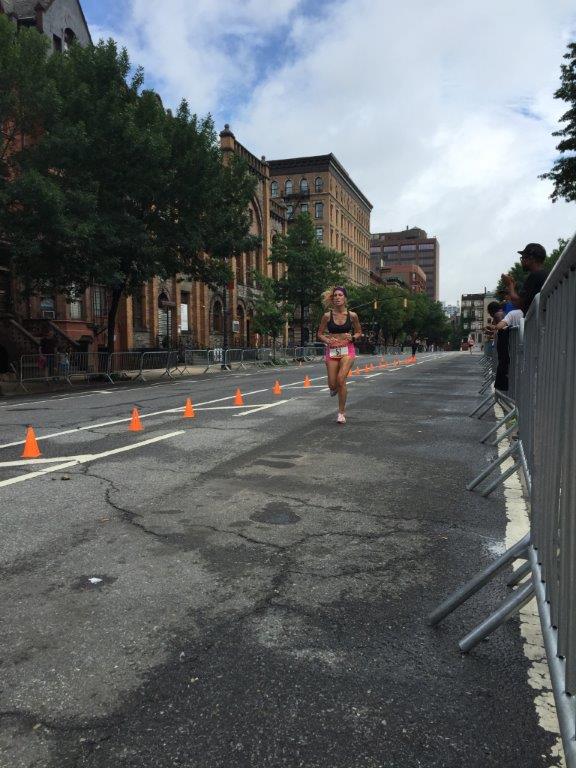 and here comes little me, in THIRD place!!!! SO exciting. Juan starts yelling, the announcer asks him my name, I hear the announcer cheering me in, wow.

the death stare. If I look at it fiercely enough, the finish line will move towards me, I swear!!!!! 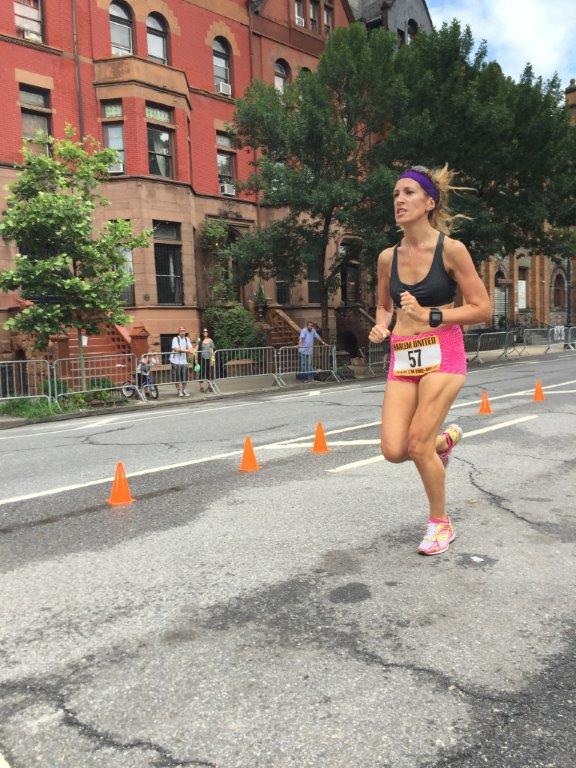 and this is what I do when I am in PAIN: my teeth just clench and hold it all there!

besides my crazy face -hey, its amile and theres the finish!!!- I love those buildings in the back!!!!!! 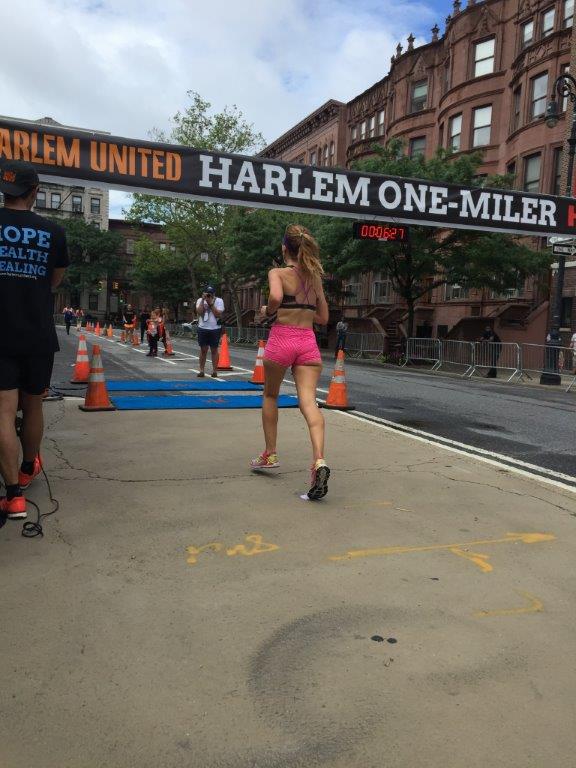 OFFICIAL RACE PHOTO by DA PING LUO. I think this is quite probably one of the most amazing pictures I’ve seen on Juan and I (and you know there’s MILLIONS). His face is precious. You guys know I love this guy so much but I don’t think he could be a 1% more supportive. He got up with me, run there with me, waited, took pictures, run back with me, basically wasted about 5 hours to watch me race 1 mile and take pictures, and he enjoys that. I am so lucky. 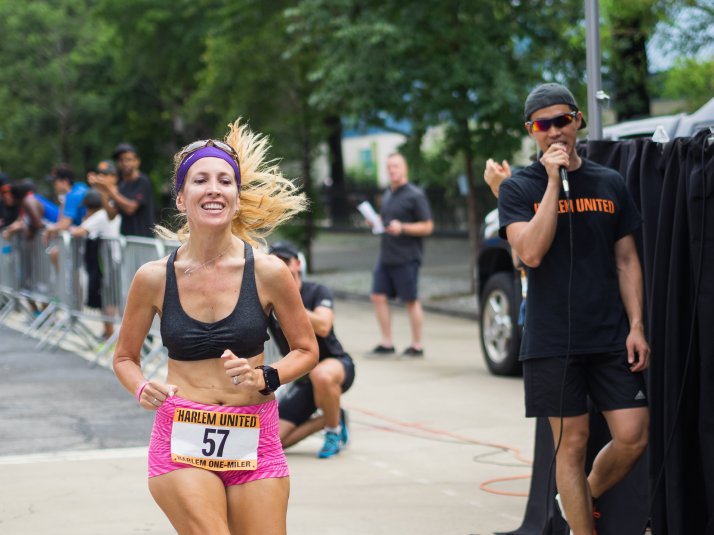 yep, feels like dying. Though… I felt a LOT worse at the last two 5Ks than this. Weird. 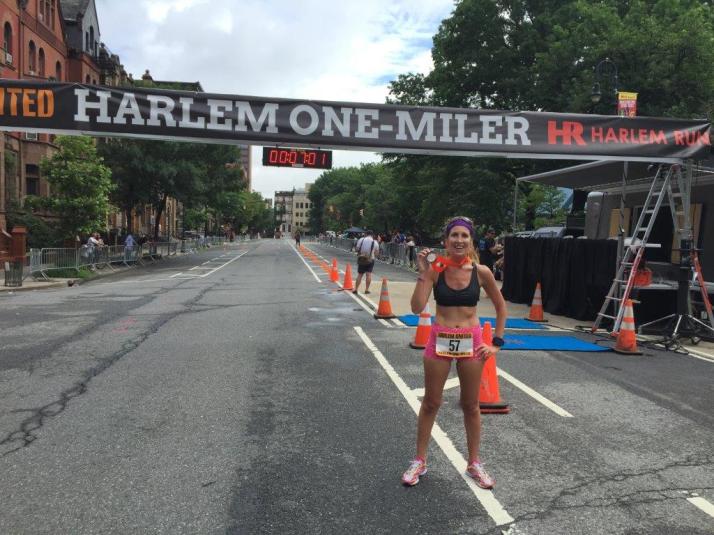 someone gave me a medal… 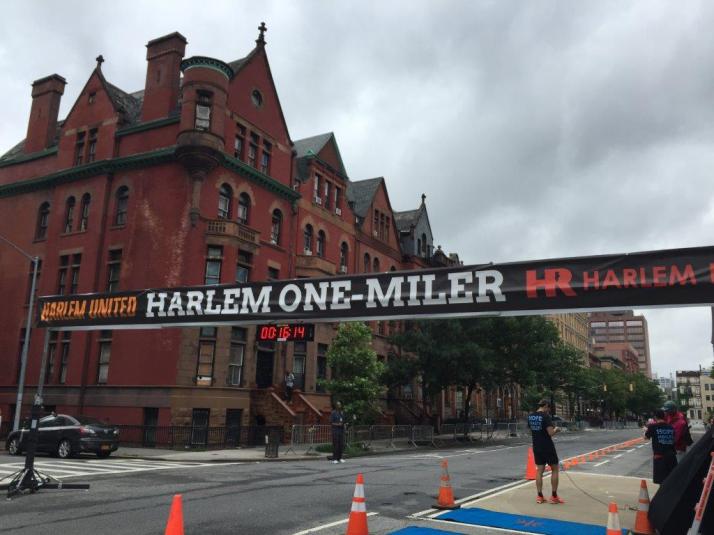 HAD to take this picture. how awesome is that building???

We then watched the family heat, everyone running with their families, kids, dogs, soooo fun and cute. I really do love cheering!!!!!!!!!!!!!!

that’s Allison, who put this race together with her team, yep, she founded an awesome team called We Run Harlem! I love this woman and I am so proud of her!!! 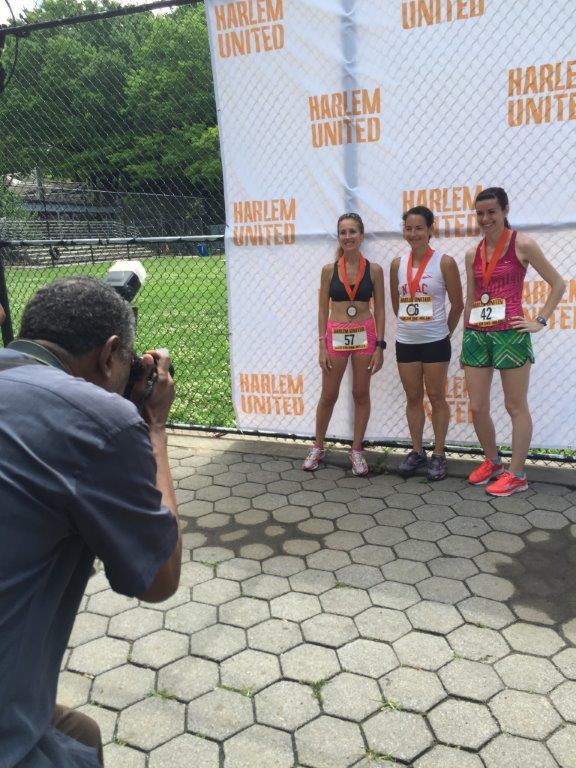 and then the awards ceremony by the finish line.

I was so tired… between the morning humid 3 mile run there, the race, the heat… I wanted to jump in a pond…

Juan and I run back home, ended with 9 miles total and then we just went crazy… lunch was ridiculous and then we walked all the way to the west side to get me some dulce de leche/dark chocolate beard pappa cream puffs…. I NEEDED THEM. A bit later, we could barely walk back. We were both destroyed, he had a tough week of work out of town and an intense bike ride Saturday and I… my life was catching up to me.  Now I have a week to the next race and I need to make sure I am recovered!!!!