Another week another race!

This past Monday was the firt R-U-N 5K in Brooklyn! Wohoo! Weekday races are the best! Also, it was on the hot side, hey, it’s mid-July but no matter. I am always game to tempo in somewhere other than Central Park. I spend SO SO SO much time in Central Park that anything else is quite a treat.

I worked at registration for a couple of hours, but the set up was in the sun. I had the sun in my face and was sweating like a crazy person. Good thing we were handing out caps as it was the thing I needed the most. The hats were actually quite a nice perk of the race!

After two hours of sweating (ugh I was gross!!) I rushed to the start and barely made it. B a r e l y. The course is a bit under a loop of Prospect Park, with the Battle Pass Hill smack in in the middle of mile 2. But after 2.5 is all downhill or flat!

We got moving and I noticed I was overheated so I decided to take it easy and keep it under control, no heavy breathing, no suffering needed. Also, my body was confused, we never run after 7 am anymore!

I had Juan cheering, spectating, taking pictures at around mile 3 (I think) 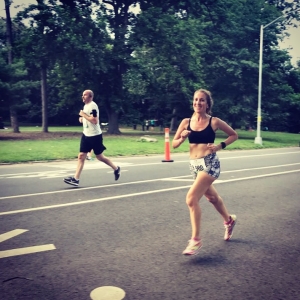 I went over a bit and it was over. I had my music but didn’t really look at the watch (not that I ever do). I walked a bit and run back to try to find Juan but couldn’t. Finished

22:36 finish in a pace that I would have used in a half marathon just a few months ago, but now it’s a tempo. These 5Ks are really hard (even harder when you don’t really train for them, or even taper for them) but it’s the best way to push sometimes, as I don’t tend to do that many tempos. A 3 mile tempo is barely the minimum distance I should be doing but yes, better than nothing!

I went back to Race Day Central to hang out with my pees and it was bopping there! There were so many people, there were some food trucks, enormous games to play in the lawn. It was really fun.

After we finished clearing most of the registration-situation, we took this team shot also, by Juan of course. 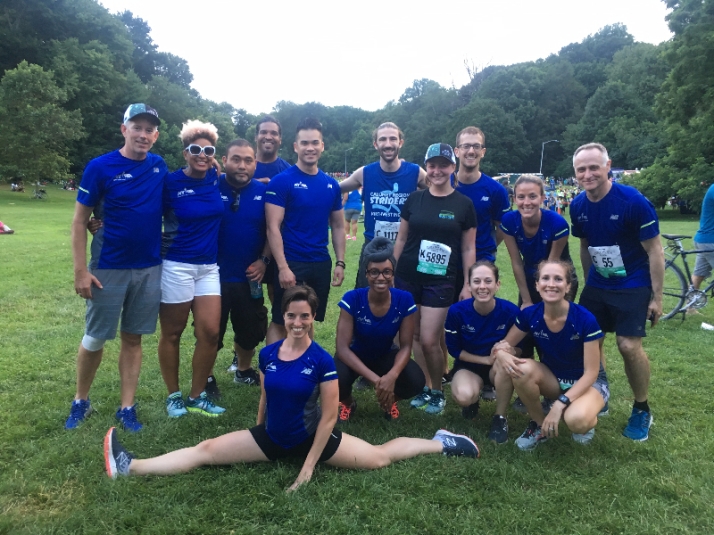 And that’s it. That was my 15th race this year. Crazy, right?