Another weekend, another race. Seems like races is all I write about lately! Well, I just counted, and I did SIX races in June… 87 miles total and 18 of those were racing! wow, 87 is not much… but there was a lot of tapering before races and resting after races… Sometimes the racing bug bites me and you know there’s no antidote for that… July looks a bit race-less, well, probably 4 races (all my races are listed here if anyone is interested) but I am hoping I can stop this madness and get some more quality training and miles in! Fingers crossed.

Every year, I do the Pride Run. It’s SO fun and a points race, and always spectate and cheer at the Achilles Hope and Possibility. It’s wild that we have 2 5 milers back to back on a weekend but the Achilles race is amazing to watch. So inspiring. Check out the race pictures here if you never have.

On Saturday, Carolina and I had planned to go cheer at the Pride Run. I took a lot of pictures that you can see here, but I’ll leave you with this craziness: 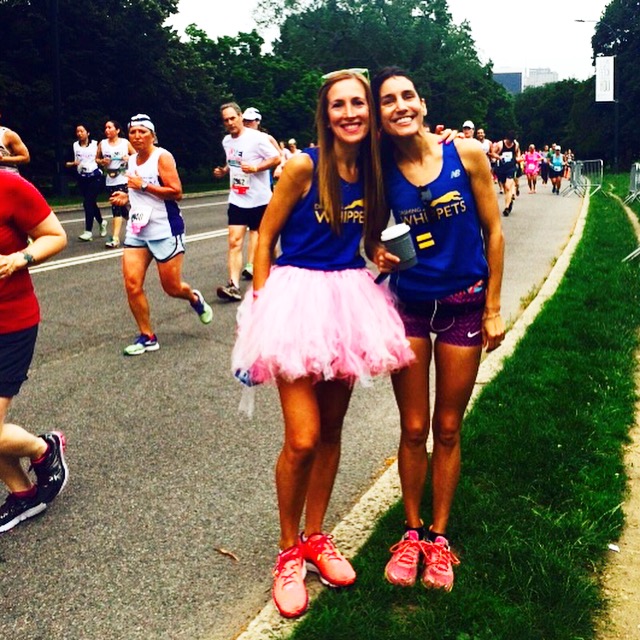 We cheered our freaking legs out! My hair is TOO LONG.

Sunday, I woke up early. Juan was already up as he had planned to bike but it had been raining, so he was just going for a long run… I got ready, had TWO cups of coffee and set out to run the 1.5 mile to the start by myself.

I had two things in my mind going into this race:

I run into Juan on my run to the start. 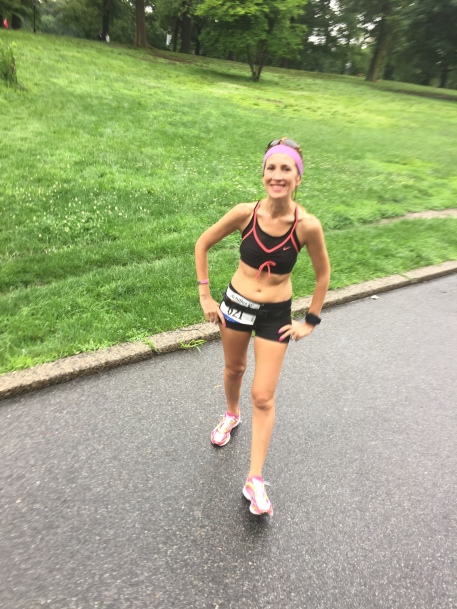 I look so tall!

We kissed and he said he’d be at Engineers Gate, waiting to cheer: that’s mile 2. Weather was fine.

A bit humid but it was overcast. I barely felt the humidity to tell you the truth. When the heart is fired up, there’s no slowing down for the little things!!!! I had checked my post about my 5 Miler PR, which was in the 2010 Pride Run with 35:37, and a 7:07 pace, memorized the splits, did all the homework, I was ready…

Carolina had signed up but she got there later and never saw her! I lined up, saw a team mate Adam in the corral, chit chatted around a bit, and heard all the speeches. Jon Stewart was there as usual, being funny and fantastic. 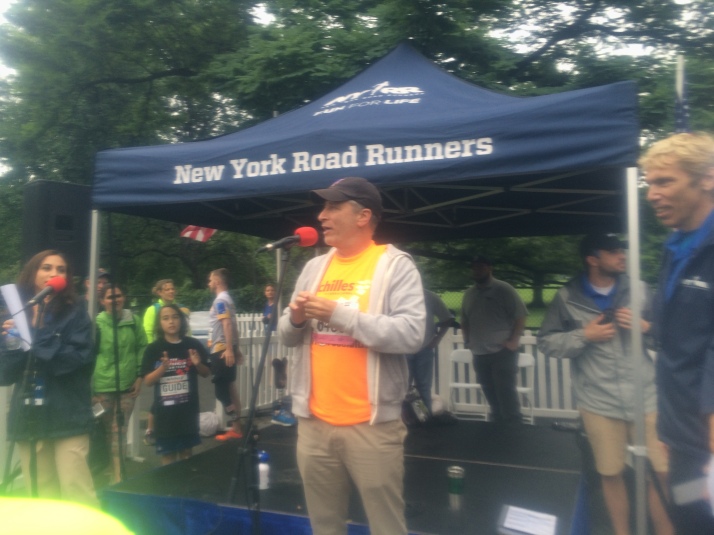 A bit blurry because my iphone was in a sandwich bag in case it rained. Which did. BUT AFTER THE RACE!!! 😦

Soon enough, there’s the gun and hand-cyclists go. 10 minutes later, the runners go. And we are off. I trailed behind a girl wearing a purple tnt shirt for about a half mile, and then broke free. I had started a it harder than usual, but it was sustainable pace. Mile 1: 6:50. Mile 1 was mostly flat, Mile 2 on the other hand, has Cat Hill on it. I kept truckin’ trying not to slip off the pace: Mile 2: 6:59. that’s fine for the hill mile! Still on pace for a PR. As soon as I clicked Mile 2 and headed to EG, I relaxed: this is going to be the fastest mile and Juan was there… Hey!!!!

He yelled at me, I yelled at him. And as soon as that happened I heard my name also coming from a few other directions. I turned left and I saw Stuart! If you don’t know Coach Stuart Calderwood, you should! He’s a freaking legend!! He’s got a bunch of American records and one of those “sub 3 marathons in every decade” titles, plus he has a 28 year running streak (that’s EVERY DAY people!!!) and he’s super fast, and a NYRR Coach, and really fast. Plus, I get to run with him once in a while. Well, he shouted, then I heard someone else, then someone screams from the bridal path (turned out to be Eric), I look down and my heart rate had spiked from all the excitement. NO!!! Focus Elizabeth!!!!! Mile 3: 6:47. FAST YEAH! I have to admit, mile 4 is when I start to hurt and question everything in life. I wanted to quit, or go slower, or sit down. “Don’t give up in your head because then your body gives up” one million times. I always slow down in this mile (same in a 10K) and it’s just a matter of saving enough for the last mile!!! Hang on. Mile 4: 7:16. It’s ALLRIGHT. Just one mile to go. I spent all of mile 4 doing the math: if I hit Mile 4 about 28 minutes, I can PR. that was all I came up with. Of course, when I got to the clock, I forgot to look… haha. The last mile is a tough one, but I was ready to hit it hard. As soon as I leave the reservoir, Stuart, who had crossed over from the east side, joins me and keeps pace with me. He was telling me stuff, I feel awful but I have no idea what he was saying. I do remember something about trying to catch 2 girls who were ahead of me, and I knew I just didn’t have enough for that. It was not a chase race for me, it was a race to try to PR and I had to keep my head on my pace. I tried to navigate all those little hills as careful as I could but my breathing was SUPER loud and I knew I was annoying everyone around me. I always feel so bad. Some guy even turned around from about 4 yards ahead of me. Oh well. I tried my best. I really felt like I didn’t have the kick I usually have but I got the job done: Mile 5: 6:45.

Yeah, that happened. I crossed the finish, freaked out at the time, dry-heaved for a bit, thanked Stuart for the company, finally started breathing, saw a lot of people vomiting, and then I looked at my watch. 34:36. That’s ONE MINUTE and ONE SECOND PR.

That’s a bit much huh? Is my watch really working?

Well, I have the 5 miles so I think yeah. I got overly excited really fast. Then Carolina showed up and we took some pictures!

OMG look at her stomach!! and she has FOUR KIDS! Plus she’s a sub 3 marathoner. Crap, I have to think of a good excuse, quick!!!!! 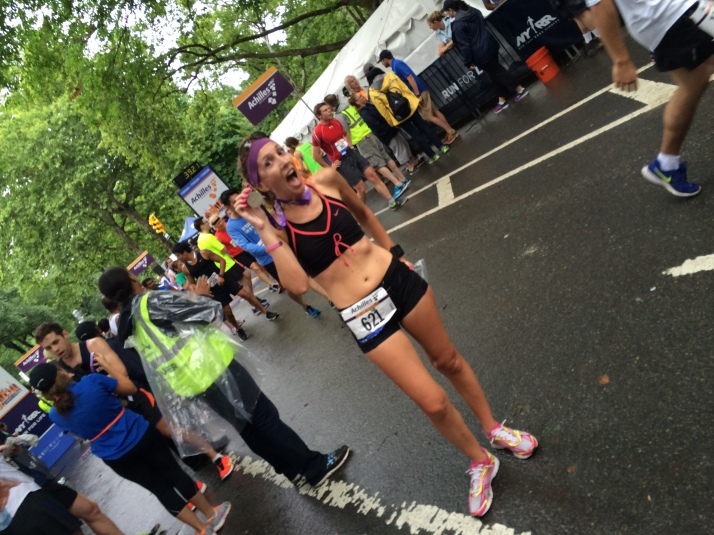 well, it’s official. I PRed. After 2 years, 2 months and whatever, it finally happened. by a minute, which is A LOT in 5 miler!!!! Also, I am FIVE years older since the day of the PR… crazy.

Carolina and I grabbed some Shake Shack they had at the finish, plus some goodies, coffee at Le Pain and walked home in the rain. 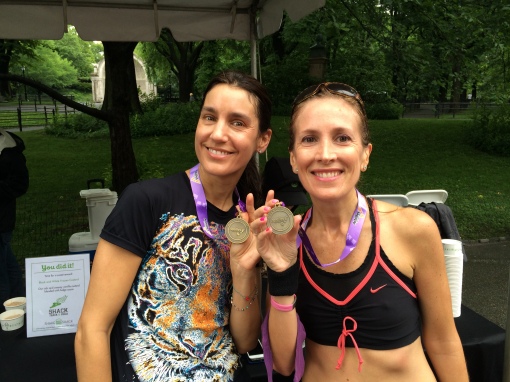 I was soooo hyper  from the two coffees and the race time, I had no clue I was walking through the whole city soaking wet… oh well. Juan was so happy… we celebrated with more Shake Shack and then some 16 handles. Because.

I am so happy it finally happened.

So, apparently this weight is ok. I still feel like I have no kick at the end, but turns out I am running faster from the gun, instead of saving more for later… it works. Doesn’t feel AS GOOD but I’ll take it!

There was an error retrieving images from Instagram. An attempt will be remade in a few minutes.

Error: Twitter did not respond. Please wait a few minutes and refresh this page.