The short story is that I met him and was able to thank him for being such an inspiration to me. The long story is that I had been thinking about Meb a lot over the last weeks.

First, there was that article in RW’s about him. He had been injured for a long time and had to go through a lot of testing and treatment to get back to running. And when things go wrong for such a long time he questioned if all this is really worth pursuing. As I was a bit frustrated with my injury, I was thinking about that too. But Meb was all in. Result: he won NYC.

Then when I started worrying about how I would hold my pace for 22 miles in Boston and not go out too fast like everyone does, like I always do, I remembered what he did in NYC. He tucked himself in the pack and waited. He “went to sleep” knowing he could do it. No one was expecting much from him, and he was smart not to rush to prove them wrong. Result: he won NYC.

I wasn’t out to win anything but if he could sit in the back for those exciting 24 miles when he knew he could do it, I could also sit and wait until my hills were out of the way. Result: I got my Boston.

My most intense Meb moment was when I saw him collapse in the park during the Olympic Trials when someone told him about Ryan Shay. You don’t forget those moments. I saw him (on video) acknowledging the place where Ryan fell during his NYC marathon. Meb is just that kind of runner and person.

He has been a great source of inspiration and answers for me these last months so when I heard he was around the corner, I sprinted! And here’s the phone picture proof (no camera, I wasn’t prepared!!). 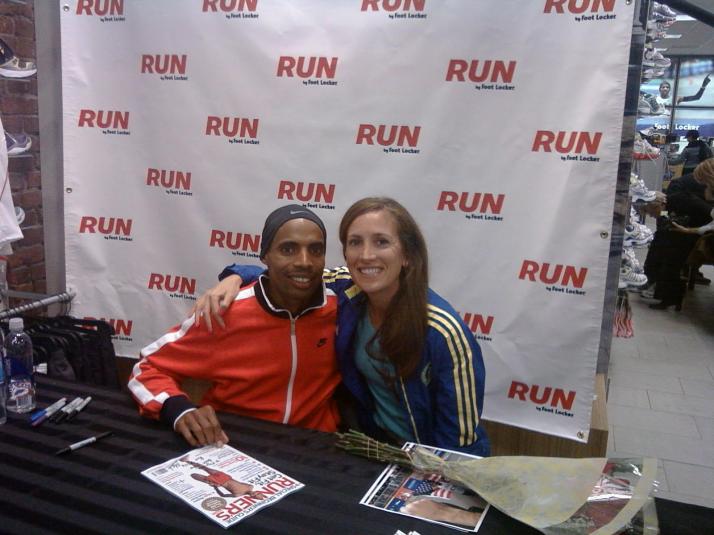 He said I looked like a fast marathoner (he’s a God, what can I say?). He saw my nasty blue toes (which at least match my blue Boston jacket), and told me to be proud of those and said his looked a lot worse. I told him I wanted to see him again in NYC in November, he said he’d do his best. We talked about how magical the NYC course is. I really can’t even imagine what it must be to win something like that… My money is on this guy this year!!

Good luck to all my loopster friends running Nashville, Kentucky, London (Go Deena!), and Big Sur this weekend!!! I’ll be pulling for you!!! Have a great weekend everyone!!!!!!!!!!