Saturday was my first race of the year!  And you know, at some point, they’ll start happening every weekend until you’re pulling your hair out and yelling why doesn’t this woman stop with the blog posts every week about one more race!?!??! but this one is special, it’s the first one!!!!

Actually, this was my 125th race. EVER. I had to look that up for course. But it’s a cool roundish number that I could push as “special” and semi “anniversary”. you can tell had coffee this morning, right? b

WHO IS AL GORDON YOU ASK?

Well, I asked myself that. How come I don’t know who that is?? Given that the race is in Brooklyn, maybe he’s famous just in Brooklyn. Well, NO, I am just clueless. So here it is, in case you’re as clueless as I was, I will declueless you!

“My favorite story about the spartan Al Gordon was his gift to St. Bernard’s School in New York while he was chairman of the board. Al made two conditions on his gift, I was told. First, there was to be no elevator, so that the students would have to walk up and down several flights of stairs. And secondly, Al wanted to make sure that the school would not close on snow days. A rigorous philanthropist he was, but keep in mind that Al was such a fanatic fitness person, he would often walk or run into Manhattan after landing at LaGuardia Airport. He was also a leading benefactor and board member since the early days of the New York Road Runners club..” from this Forbes article which is quite interesting. There is also this article in the NY Times, if you have time. He died at 107 so he must have been doing something right. WINK WINK.

Back a few months, Juan went into a race-signup rampage and signed up for this race among 10 more, without realizing it was in BROOKLYN. Yes, no biggie, but on a weekend, early, when you leave on the Upper East Side, getting to Brooklyn is quite the nightmare. A real pain. You know how much I love the MTA? ZERO. Anyway, what am i going to do, just get up at 5 am and travel to the end of the universe to cheer for 2 minutes? NO,  I signed up too. I was in.

Disclaimer, travelling wasn’t so bad. We met up with Ivy in the corner at 6 am, and got to the start by 7:20, ready to freeze our a$$es for 40 minutes. It was 40s, but cold 40s. I think it’s just colder in BK that in the city. We met up a lot of people at the start and Juan started fading. He had had this flu for the last 3 weeks, you see? He hadn’t run in weeks but he had been feeling better for the last 4 days and we assumed he was ok to run. Emmmm.

We undress down to our short tights and singlet/shirt and get to the corral. HELLO SUN! 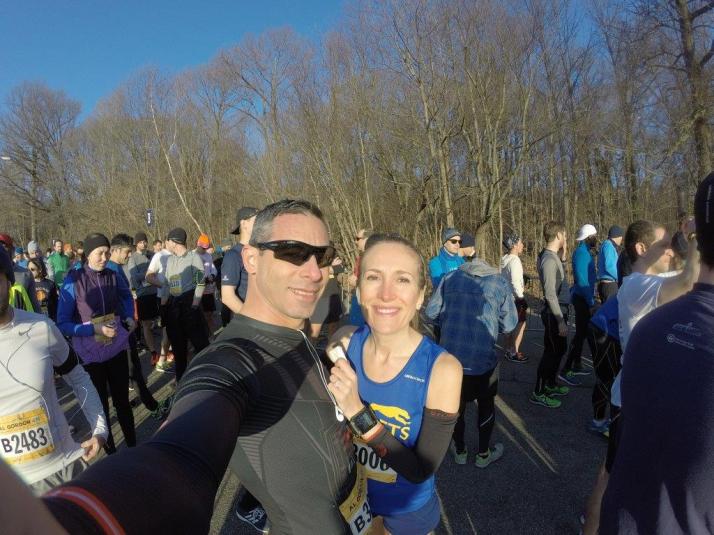 Soon enough we go. Juan passes me, as usual and I just commit to taking the hill as easy-hard as I can. You know what that means right? Uh. It’s not steep but it goes on and on and ooooooon. I see a team mate, Ian, as he passes me on the uphill, we wave and say hello and I decide to let him pull me Keep Him in Sight I kept telling myself. He ended up sitting about 10 yards away from me and it was perfect for me to just chase him.

By Mile 1.74, yes, I remember exactly, I saw him coming back to me (though I knew it was me pushing the pace) and I saw a little hill come up, I told myself to not pass him until after the hill. Oh. As soon as I noticed I had passed him and I was running like a furious crazy person. I knew the last half mile was uphillish so I had save time now, until 3.5ish. Mile 2: 7:01

I kept pushing up and down the little bumps on road. Running tangents in Prospect Park is so hard!!! There’s more than in Central Park and I am NOT familiar with them! Mile 3: 6:36 So, If i can run a 6:36 in a 4 miler, I wonder if I could break my 6:05 Mile PR… interesting!! Then I see Juan on the side of the road looking for me, all spent the poor thing. I yell at him and he gets back on the race, right ahead of me, tells me something about how he’s done and he’ll just run with me and take few pictures.

Ooooops. Then I passed him. You know he’s SICK if I can pass him!!!! But, these pictures: 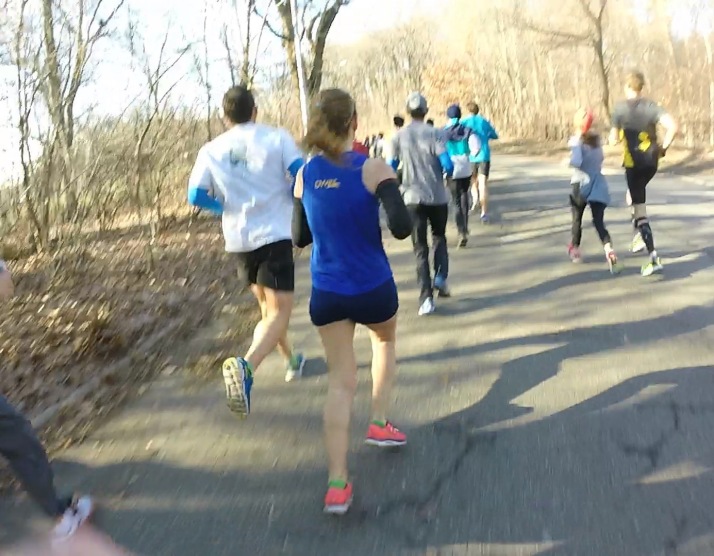 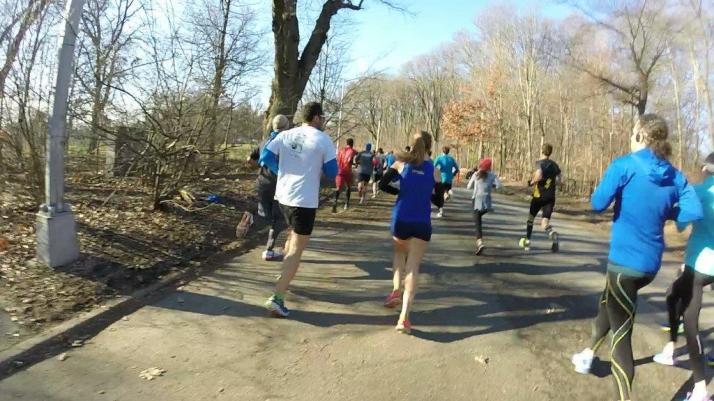 by then, I was ON FIRE. If you’ve run with me on the last mile of a race you know how I get. FURIOUS. my breathing is loud… I really take out all of my oxygen out. Juan now has video to prove it but as you can imagine. it’s too scary to share. So, no.

I crossed the finish line ready to puke, as usual. 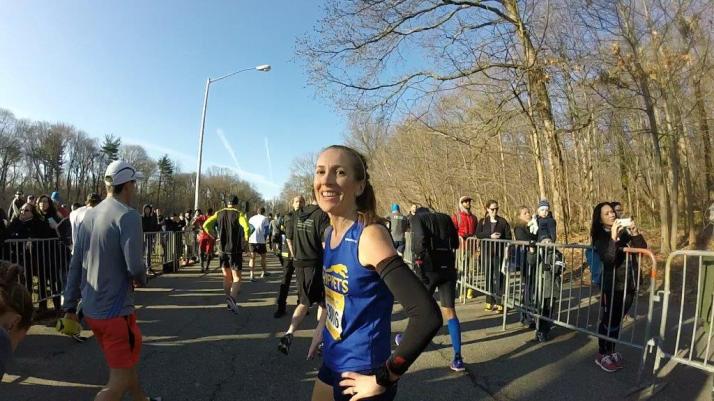 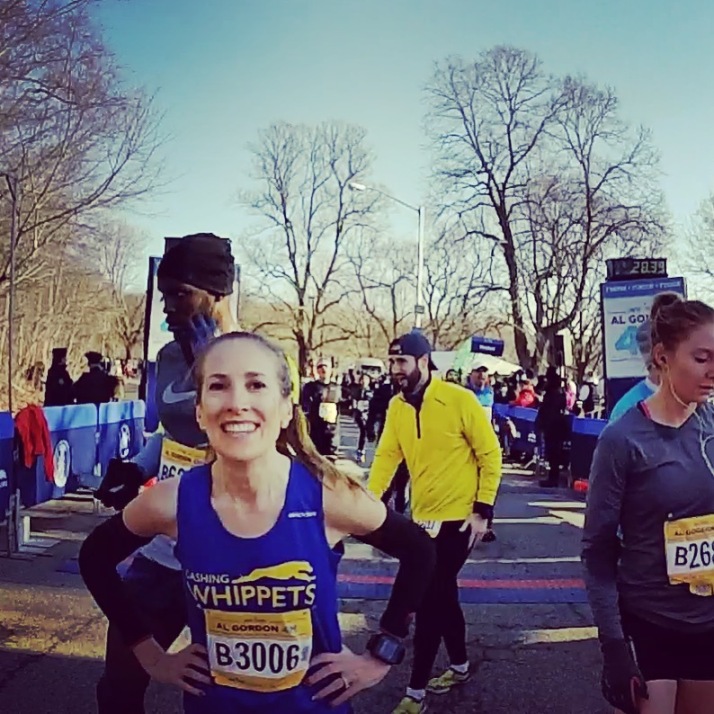 NO PR!!!!! but 3 seconds away is ok. We are just starting the season. UGHHHH

Take a look at the hill on mile 1, fun times 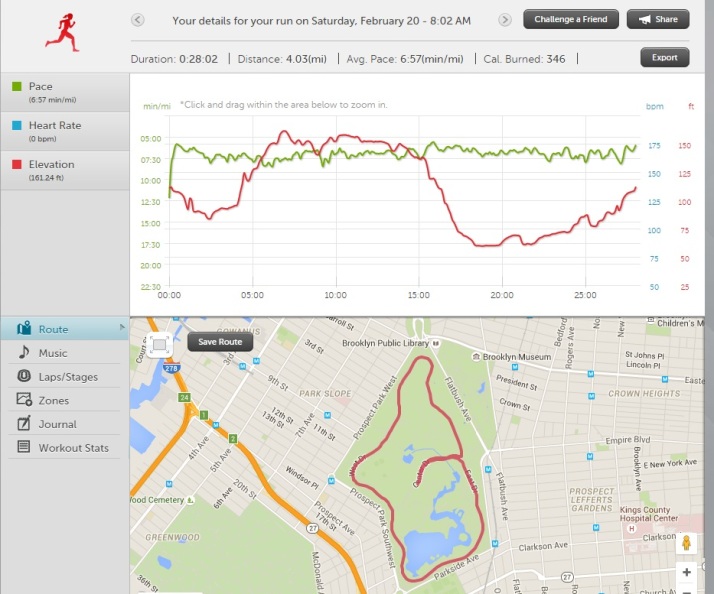 oh well. 2nd in my age group is fun though. I am getting one more of those plastic squares with the placing for the window!!!! Wohooo!

We caught up with the team, a lot of friends and then we just walked like to miles to have brunch with Flor at Miriam, which was amazing. Plus it was also a block away from R&A Cycle which is probably where Juan would spend all his money if he was a millionaire.

who needs a 20K dollars bike? THIS GUY

see how happy and not miserable he looks when he’s close to a bike? OY

PS: I went for a little 7 mile run in Central Park on Sunday and felt ok… which is weird. I am usually destroyed after a race. I wonder if all this crosstraining is helping…!

Two pictures from Sunday morning! It was FIFTY DEGREES. THIS IS THE AWESOMEST WINTER EVER! 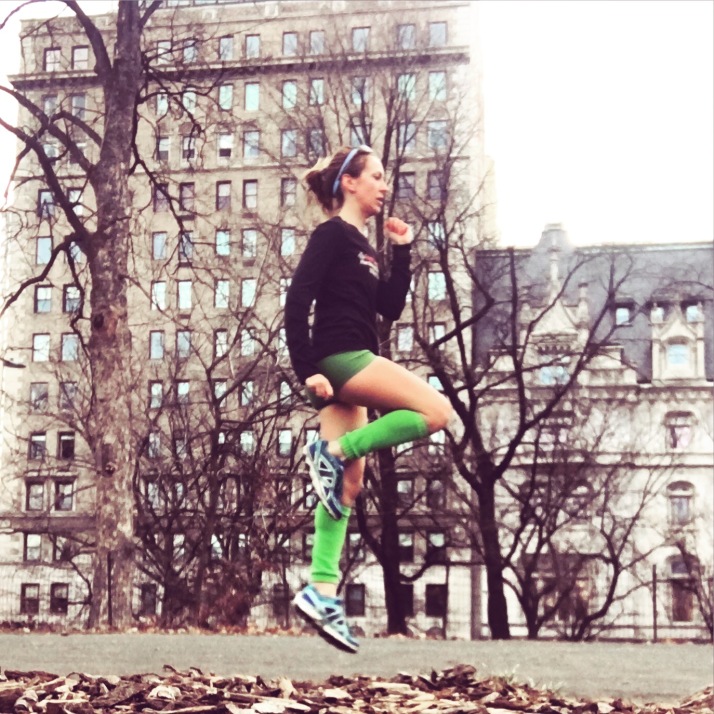 what did you race this weekend? how did it go???