well, a NEW RACE for me! How exciting is that??

My friend Tracey moved to Sharon, bought a house or two and opened a bar, all while still having a job in the city and being her amazing self… the town has a race and her bar sponsors the race so we all schlepped up to CT for the weekend to race and see what the weekend fuzz was all about.

The place is gorgeous.

Full of green, trees, big houses with what I dream are the biggest closets and amazing lounges, and it’s all slower and so much more space (than we have in NYC)… Friday night we went to a cute town called Millerton to walk around and do some shopping and then to the Edward for some pre-dinner cocktails, and then to swift for dinner with the group. There were no pictures for some reason. It was good.

Saturday morning, race day, I woke up at 5, but given the race was at TEN FIFTEEN IN THE MORNING (that is what I call an ungodly hour!!!!), I went back to sleep and managed to snooze up to 8 am. SO CRAZY. We rolled up to town to race… there was no warm-up, I didn’t even have breakfast because I was still full from dinner so we just got our numbers and made it to the start.

We got moving! David wanted to do 7:10, I said 7:30, cause I had heard it was hilly… I had done 7:34 pace in the 15k the weekend before and 7:28 at the 10 miler but this looked rough… Anyway, David took off and I went with him, which was a tad too fast for me. The course was soooooo beautiful… Ilse caught up on the first mile but then she drifted off. Mile 4 had a crazy hill, and David pulled up by about 10 seconds… It was rough, but, really, it was undulating the whole way.

Here is a video recap I made during the race so you get a good visual:

Here are my splits!

Check out mile 4 with the biggest ascent (disregard the 5th one, that was after I finished and forgot to stop the watch).

We got awards, I placed 5th woman overall and 2nd in my AG, which was fun, and came in about 20 seconds behind David I think. It was such a cute but hard course!!!

Then we went back to the edward to get celebratory drinks and replenish. By the way the finish line food was awesome and mostly homemade, I had lots of brownies and cake… seriously wow.

Planning to go back next year already!!!! 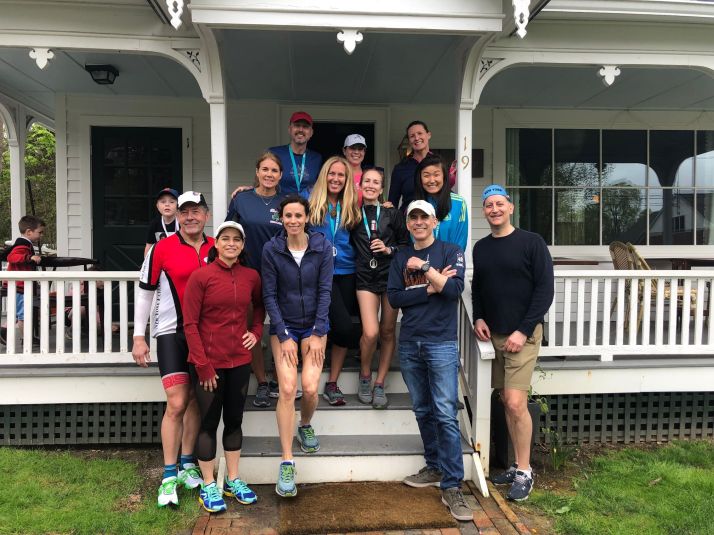