After having PRed like a maniac at the NYC Half two months ago, I set this one as my next goal, but.. I didn’t really train seriously… here’s what happened!

Bib Pick Up/Registration. It was amazing!!!! Best “expo” EVER, though they weren’t calling it an expo, it was more like a pre-race-party, like a fair, or outdoor sports party.. or something. There was live music, djays, food vendors, a bit  of shopping, and nice views of the city. If I didn’t have scheduled just 2 hours for that, I would have stayed there all night! 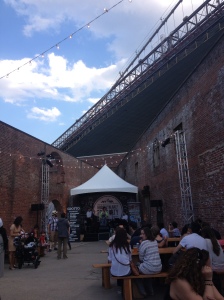 Getting there. Was a pretty easy on the 5:06 am 4 train, but it was running local so it took a bit longer than I planned. Luckily, it wasn’t crowded and we got there wit enough time (which meant we woke up at 4 am!). Then it was just a quick 5 minute walk to bagagge which looked like the airport. Corrals were just two blocks away. It was super clean and easy. Pretty much all runners in the train, minus this guy 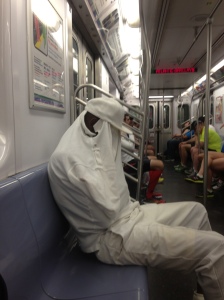 Start. Super organized. Lots of security. I love when we have the portapotties IN the corrals. No stress waiting in the lines, perfect. 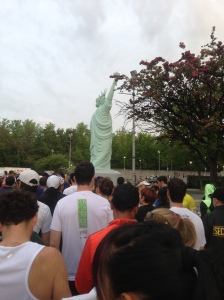 Race Atmosphere. The race is huge but still it felt like fun. You had everything, from Kim Smith, to runners on tutus. It was very relaxed and fun at the start. In a way, it felt like a small town race… I know, it makes no sense!

Safety. There was security all over the place. Baggage was inspected at tons of tables before you could drop it (no lines!).

Weather. It was in the 60s and I thought it would be hot… It wasn’t. Actually, it was perfect. It was overcast so without the sun, we did pretty well.  I did throw a bunch of water cups on me, which made me freeze after I finished, but the weather never really bothered me.

The Course. Is… interesting. There are a couple of hills in the first half, and then flat or downhill past mile 6. You REALLY have to negative split here or you did something wrong. Good course to PR in, though for some reason, I never seem PR here… There is the one hill in prospect park, which is not that steep but seems to last foreeeever (elevation profile is here). There can be way too much sun after you leave the park, but luckily it was overcast.

The Finish Line. the best part! You have around 400 meters to run on the boardwalk and it gets loud and crowded, even before 9 am! They had medals, pretzels, apples and gatorade+water. There were a few blocks walk until we got to baggage but it was super organized and easy. Really nice medal, just like last year too!

The Post Race.  Well, this was the first time I didn’t stay for long. I was freezing and Nathan’s was closed (and I really wanted a hot dog, damit!). My team had planned a beach day and I knew I’d froze if I sat in the sand.. so we just left, which is was most people did: trains were packed (and smelly!). PS: I met everyone in the train!

Well, I really I had no idea what to expect. Having PRed lately I knew I’d do okay but I wasn’t sure I was in the same shape I was in March when I PRed at the NYC Half…  I had been training but, there was a  big fat issue… I’ve put on around 10 pounds since March. I have been having fun and eating and lot and enjoying life so I will  not complain , but come race day, you totally feel it! After a few miles, it gets heavy… Yeah, but Oh well. LIFE IS SHORT! (and my shorts were tiiiiight!). On the other hand, I again wore my brand new Mizuno Wave Sayonara, LOVE them.

I did race super smart so I know I couldn’t have done better. I started slow and my last miles were a romp. I actually spotted Julie in my corral and we started together. I wasn’t sure we were the same pace but we run the first three miles together, and then she took off. I’d see her in the uphills or turns, 100 or 50 yards ahead of me, but that gap was way to big for me to even try to get to her. I decided to let her go, and forgot about it. The first two miles we run were quite smart and slow. The third one, a downhill, was deliciously fast, the we got in the park and got back to a regular modest pace. Then the climb, which I took really easy… Once I left the park, I really wanted to hit the gas but I wasn’t sure there was much there, so I kept it conservative for a while. At around mile 9 I spotted Julie ahead again, closer, when I was following a guy I had been chasing for the last mile. I run with her for a few seconds and kept going. I was already pushing and wasn’t sure I’d have enough but I knew I was close to my PR so I got hopeful and really tried!

can I point out my beautiful cadence again?

I am VERY HAPPY with the race I run. I was not in shape to PR but I know I used all I had in the most efficient way. It was as close to perfect pacing as I could have done.

How do I know?

ALSO, I compared it to the pacing of the women who finished around my same time… you should do this sometime!! Check out the difference in pacing (I am the one on top in italics). Check how most of them took a bit longer than me to finish, but crossed the 5K and/or 10K earlier than me (the first aka hardest part of the course). By 15K I was the last one of the five. Quite revealing, isn’t it?

So, eventually, after years and years… you start trusting yourself and you know how to pace efficiently and smart. Not an easy feat, at least for me, but I am feeling good about this one. Now, if I could ever get my need for fun and delicious food under control, I think could do great things and go faster, but.. WHO ARE WE KIDDING?

and here is the link to my 2014 Brooklyn Half Marathon Report and Pictures!

And the winner to my Guess My Finish time contest is Mr. Tim Emmet, just 3 seconds away, who said: 1:38:32 because it will be a little warm. Good luck!  —Worth noting also, njpaleo said 1:38:25, FOUR secouds away… CRAZY.