First of all, WOW.

It’s the first thing that comes to mind when I think about yesterday’s race. NYRR does such a good job with these huge events where so many things could go wrong… And, they had a top elite field who I felt I was chasing the whole time. The problem in this race is generally the weather, it’s usually really hot or humid or pouring rain, and yesterday was horrendously hot. It was great that they had water and gatorade (G, sorry!) at every mile, as well as misting stations (heaven!). And though I’ve done this race 2 times before,  you forget how amazing running through Times Square is. And just so you know, I HATE Times Square, I hate hate it. I wouldn’t go there if you pay me, if you bribe me with food, I hate it, like most people who live in NYC. But when you’re running there, at 8 in the morning, and there’s no cars, or millions of people, and it’s just you and the road, and the lights and 10.000 runners: it’s just magical! (just wait until you see the pictures…!). Of course running Central Park is always a treat, as well as crossing the whole island north to south, and finishing in Battery Park with amazing views of the Hudson and the Statue of Liberty. Yes, yes, I just love this city!

Anyway, I was off my PR by 3 minutes, but it was a course record (by two minutes) and given how I started running again 2 months ago (after the 5 month injury hiatus) and it was super hot, it was a really good time for me. I also decided not to go all out, and enjoy the race, which I never thought I could do, but seems I have acquired that talent now. It was still a demanding race, by mile 6 my orthotics gave me a blister in the arch of my right foot. Then I felt my left toe throbbing, another massive blister!! And the gels were messing up my stomach, which really slowed me down. It’s strange because I never had problems with the gels before… but it could have been related to the heat. I hope!

My plan was to keep it conservative in the rolling hills of Central Park, the hardest part of the course. And then I’d push it in the last three miles in the stretch to Battery Park. Well, Central Park felt comfortable (I train there!!!) and I was going fast, but it felt right, so I was going back and forth between “this speed feels right, I am relaxed” and “I am going too fast, I need to calm down”!! Confusing?, yes!!! The last miles were a bit hard, it was getting hotter and there’s no shade in the West Side Highway! But I finished strong, without the sprint I had hoped for, but strong. And, my biggest source of pride, I didn’t stop once to walk (other than to grab water), which is a first for me!

All in all, it was a great race for me. I felt comfortable, the half is definitely my distance! I stayed for the awards ceremony, as I hadn’t met Paula Radcliffe before. She conquered NYC once again and she’s always amazing in the NYC Marathon. I got to see Deena Kastor backstage and she looked really sad, when Mary (Wittenberg, NYRR’s Director) was introducing her, she burst into tears. It broke my heart into pieces to see her like that, but I can understand it (well, there’s obviously a lot more for her on the line!!!!). But she was all smiles in the stage and with the fans, a true pro!!! Same with Ryan Hall, but they put out impressive and gutsy performances and that is all that matters to me.

Given the heat, everyone who crossed that finish line earned that medal, because you knew, just by looking around, we were all struggling and still trying hard. And sharing our blisters and horror stories as soon as we were able to get rid of the shoes! 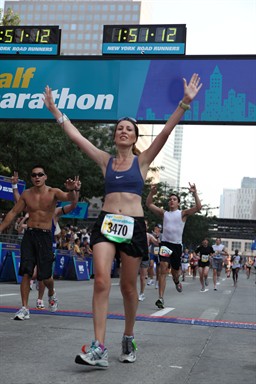 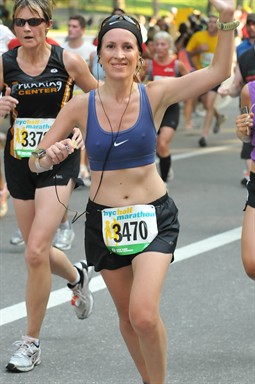 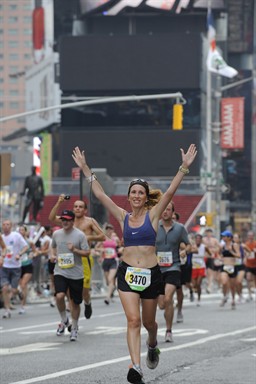