I’ve been a bit busy lately but I didn’t want a long time to go by without sharing my experience at Millrose this past weekend.

Sidebar: in case you’re not familiar with Millrose Games:

The Millrose Games is an annual indoor athletics meet (track and field) held on the first Friday in February in New York City. They started taking place at the Armory inWashington Heights in 2012, after having taken place in Madison Square Garden from 1914 to 2011.[1] The games were started when employees of the New York City branch of Wanamaker’s department store formed the Millrose Track Club to hold a meet. The featured event is the Wanamaker Mile. (more here)

I’ve been going to Millrose, since I remember liking track and living in NYC. Here is my post from last year, when EVERYBODY was there. Having had the whirlwind-iest last two weeks that I had, I didn’t even check who’d be running. So lame of me… surprise me Millrose. I knew Centro and Lagat would be there and that was enough for me!

Did a great run that day to get inspired, and even watched Saint Ralph, one of my favorite running movies. You gotta get in the mood, right? I then got this breakfast of champions:

It was Valentine’s Week after all!

We barely made it there for the Opening Ceremonies, and as usual, I never made it to my seat… I like hanging out by the track and located my friend Sid and his wife who are such amazing runners and friends and hang out, just like last year. Sid remembers every single runner and world record, ever, so that makes my work a lot easier. 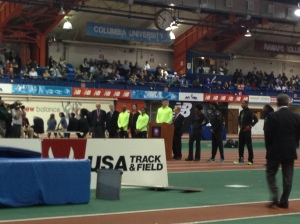 A hot second after they were sprinting and we were screaming. It was just so intense the whole night went by in a minute, even if it was 3.5 hours and we were standing. I just never let down. I did walk off to the media section for a bit and got to chat with Peter Gambaccini. If you read anything running related, you know him. He writes all the amazing RW.com’s news and knows EVERYTHING. I met him last year and when someone introduced him to me I screamed like I had just met Justin Bieber. Yes, he’s that amazing! I’d say, bookmark him.

But back to the action… we were right on the track. I love putting my hands on the track (ok, just the tips of my fingers or the guy with the flag would come my way) when the runners go by. Such… force! You really feel it there… it’s quite breathtaking. Mostly when you know that you’ll never ever get to do the speeds they do!

Going back to the crazy week I had and not being ready for the event… I then hear Nick Symmonds is racing next.. WHAT?!?!?!??! Seriously. WHAT? I had never seen Nick racing. I am gonna admit the unadmittable: I’ve always had a *bit* of a crush on Nick Symmonds. Well, you all saw my previous post where I screamed about him. Well, Nick RUN.

Then it was time for a very exciting 2 mile race. I like the longer races as it’s funner to watch the positioning and strategy 😉

Lagat threw down (and then fell on the floor after too!) to get the american record down to 8:09.72. Such a great race. 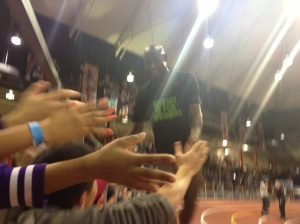 Then, soon enough, waaay too soon actually, the national anthem and the main event, the Wanamaker Mile. The women’s was fantastic, but I was really dying to see Centro and Lagat go head to head again, since the last time I saw them at the Fifth Ave Mile.

It was surreal. There is just something about this event, and how upclose you see them lap after lap, you can possibly even know what they’re thinking…

The thing is… they went out too fast (1:53) and that threw the option of a record out of contention… they all just went with the rabbit!!!

Too close to even get a picture… They are TOO fast (and I should have brough my camera instead of just my phone!!!)

Eventually Lomong and Centro sprint for the finish, while I held my heart in my hand, and Lomong beat him 3:51:21 to Centro’s 3:51:34. Did I mention in this post how much I enjoy watching Centro run? Just had to say it.

It was intense though. I was shaking for over an hour and I needed help getting out of the building. I am NOT kidding. I thought I was going to pass out.

Lagat again, and his cute kid

And while I was bring transported out… you know what happened… I saw Nick Symmonds, I almost fainted while talked to me about stuff. And then I left, in shock or something. Post is here in case you missed my ridiculousness. Sharing again, just because I can’t stop. 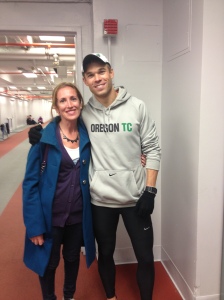