Tuesday night, I hosted a biomechanics clinic and by the time we got home it was late. We ate (A LOT), passed out right away, and when we got up Wednesday, and headed out for me run, my stomach was still super swollen. I wasn’t too concerned, I am used to overeating and I never ever ever get a peep from my tummy: we get along great. Until now.

I did mile repeats, and when I got home, my stomach started hurting. A lot. WEIRD. My stomach really never hurts. It hurt all day at work, and I was still really swollen, but no other symptoms. I tried all the basics, ginger ale, coffee, tums, nothing. By time I got home, like 9pm it was really bad. I ate and it got worse. I couldn’t even lay down to sleep. I sat in bed, eventually, at 4 or 5 am, with the bf massaging my stomach, the pain stopped, and I slept a little. Thursday morning I was better, should I run? I decided to wait until after work, the pain was still there. For lunch, I wanted something light, pasta and tomato sauce, no cheese, no garlic, nothing.  As soon as I had the pasta, I started having a lot of chest pain. So, naturally, I got scared. The bf, who had been begging and coaxing me to go to the ER all night, now was relentless. Anything else I will ignore into infinity, but I don’t look away from chest pain. What was making matters worse was that the time I had the heart episode I had ALSO felt stomach pain for a couple of days. I gave in and let him drag me to the ER. I was crying and in the middle of a lot of chest pain, I could barely talk or breathe.

When I walked in the ER  at the New York Presbyterian Hospital, I was hoping for an instant EKG. All I wanted was an EKG. I said to the bf I can’t breathe. He went over to the check-in, told them my history and in two seconds they did my EKG. It was weird, they were not sure what to make of it. An hour later, I was inside the ER, in a bed in the middle of a hall, just like half the people there. I still couldn’t lay down, so we just sat there. They were attacking my problem two fold, the heart side and the stomach side. I was scared shitless. I couldn’t see any positive outcome, if it was my heart (the scariest option), I knew that’d fuck up my running for a while. But if they had to remove some kind of organ (or if it was my kidneys? stones? an infection? the liver?? whaaaaat?) it’d take a while too and HELL, MY NON-DIET!!! Anyway, I was stressed out, scared, and OH, SLEEPY and tired from all the pain. I was a mess. All I wanted was to sleep and forget all about this. 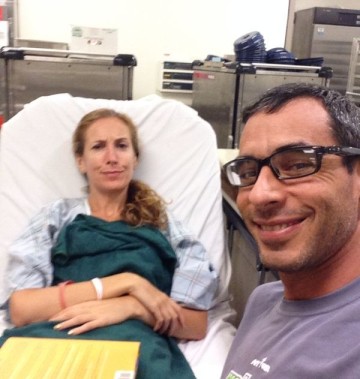 After 7 or 8 hours of tests, they ruled out anything to do with my stomach, but they weren’t sure about my heart. My EKG was… weird, to say the least, and they didn’t have a previous one of me to compare it with. They took blood again and did a second troponin test. If that went well, along with the results of a couple more tests we were still waiting on, they’d let me go. I waited for that one test so excitedly… meanwhile, I got hungry, had two pieces of bread with chicken broth. It tasted like crap but I was happy it wasn’t making me sicker: they had given me a gastro-cocktail that would numb me all up inside (I NEED that recipe!)

By 11 pm, the troponin test was back and I was OK. They were ready to discharge me. So, what was it then that caused all that pain??? GERD! GERD is Gastro-oesophageal reflux disease. But… I don’t drink, I don’t eat spicy thing!!! Apparently there’s many other triggers: big meals (done), sleeping right after eating when your stomach is about to explode (done), carbonated drinks (the ginger ale!), tomato (done!)… all little things I did and the ones I added to try to fix it combined, produce an ACID EXPLOSION that topples over your esophagus and it feels like the acid is burning your chest/lungs. All that acid can create ulcers in no time. It was just nasty scary stuff I couldn’t have imagined as I didn’t have any gastro related symptoms (no gas, no vomiting, NOTHING!).  I had to take these pills and watch what I ate.

Leaving the hospital, I didn’t believe the diagnosis. I really thought it was impossible. Got home before midnight and I was SO tired I passed out in a second without eating. Friday I felt better, obviously weak and tired, but no pain. Until I ate: a banana and oatmeal for Pre’s sake!!! Hell again. So I read about GERD and what I could and couldn’t eat. The chest pain was the acid burning over the esophagus, plus me having a mini panic or anxiety attach about it when I got to the ER. The ER still scares me. Really, a little thing triggered a big mess. But, this was possibly the best result: no heart issue or anything to have surgery for!

Juan did some grocery shopping and I promised to behave. We went for a tiny walk and I couldn’t even stay upright. Lamely weak. I ate early, little portions, and I still couldn’t lay down to sleep, and I was SO tired!!! I slept propped up in my pillows. Apparently, I still have a LOT of acid in me and will take some time to get rid of it. Had an intense episode of pain wake me up in tears, had more mylanta and tried to sleep again… I’d just been so tired from the pain-stress. Saturday was a bit better, again, until I ate. I suck on tams all day, I chew gum (saliva dilutes the acids), I eat little and boring, I don’t move. And I missed my long run!! Plus, I obsess over missing my training. I am in Week 5! We tried another walk, and he just leads me home after a few blocks when I start walking with my eyes closed. We watched a few movies, been reading Born to Run for the 4th time, and just barely doing anything else. I feel weak. Sunday was a lot of that too (good thing is Juan has now watched 3 Harry Potters, which he had never seen, and I watched 3 Rockys!). Hopefully I will be ok in a few days, I am just hoping this is not a chronic thing and I can forget all about soon and go back to eat trillions of tomatoes. Plus the other stuff. In moderation and small portions OF COURSE. 😉

18 thoughts on “I went to the ER and all I got was this lousy non-running week!!”