After the Hot Dog Challenge FAIL on Saturday, my stomach was a mess all day. The next day, same thing, plus a headache. Yuk.

I decided to stay put and sleep it out, maybe I would not run Sunday… (as if!).
I checked on Helen’s 5K (which she KILLED with a massive 30 seconds PR at 18 and something) and she was like I am doing a Hash Run at 3 pm… It was around 1 pm and I was still iffy… But, nonetheless, at 2:40 I decided I HAD to go out. My stomach was completely empty though. Also, wtf is a hash run? As I had no idea, I wore my marathon shoes… just in case!!
What did I know? Well, they run towards something, probably booze and you have to figure out which why to go on the run. That’s all.
But, I had no clue there’d be that many rules. Heck, even a different language!
So, we got there like 20 minutes late so we had to catch up to the group. Then there were chalk markings on the corners. Sometimes.
Some times they were arrows telling us where to go, sometimes it was a cross with a circle around it, which meant you had to check all directions, then come back and mark the course for the rest of the group. And make another mark in the arrow… 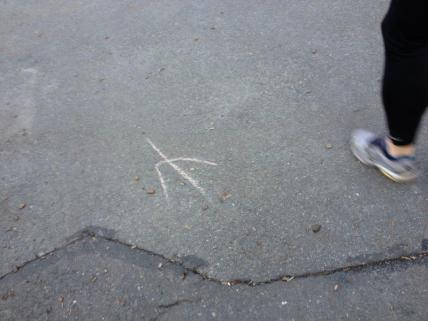 So, there was a lot of waiting around and chit-chatting in corners, or retracing our steps sometimes.
It was a little confusing for me…
There was also a LOT of shouting, which I would have loved to do too only if I managed to get it straight. On On, means you’re on course. On Left, On Right, means turn here. If you scream Are you on? you’re asking someone if he knows where on earth we should be going… Lots of of screaming, and passing the word back…
Most of them had a shirt that said something about a hash club. Or about ON ON, or about Beer… Two colored socks were the thing in the group. Note to self! 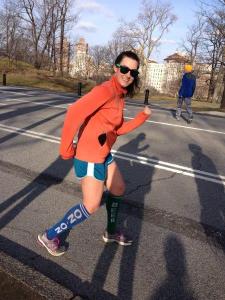 As you can see, eventually, we ended up in the park… and there was like some middle of the run meetup situation (I am sure it had a particular name), where people refueled on beer. I stayed very far away…!
Note I am still on an empty stomach and 4:30 pm, with an hour and half of hashing… 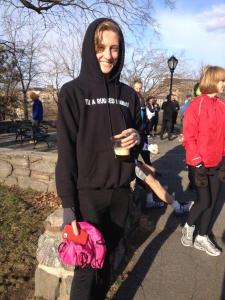 Helen celebrating her 5K VICTORY (well, I call it that!) 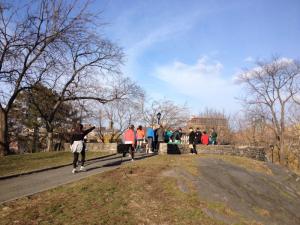 After that refueling, you picked the chicken or eagle…
If you know me at all, you know I am no chicken, and Helen is always three stephs ahead of me! It was tough though… I was starting to get hungry, lightheaded, tired…  and we got on the trails… 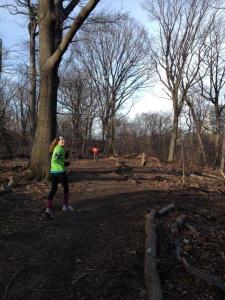 It turns out, you can’t make markings on the floor, so they used trees, so we really had to keep looking all over the place. Trees mostly, see? 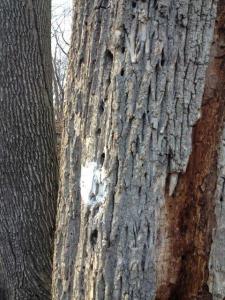 And then… we got to the craziest part. I had to climb… I hate hate hate heights. So, somehow, I did it. And by somehow I mean crying, whining, panicking, and b!tching! 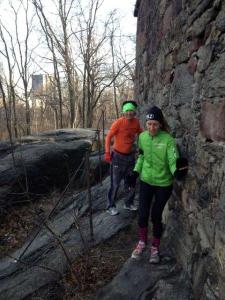 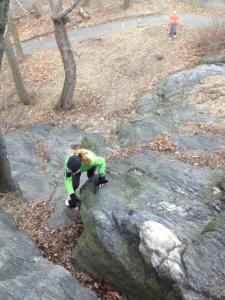 Soon we were on the west side, through Columbia University, and into Morningside Heights! 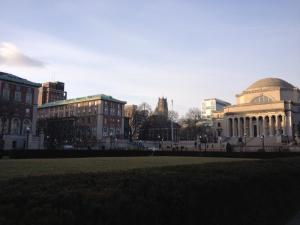 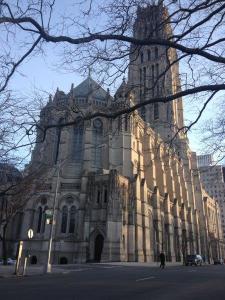 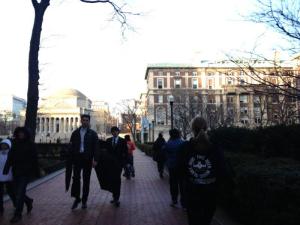 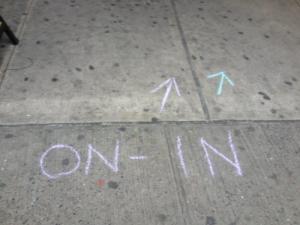 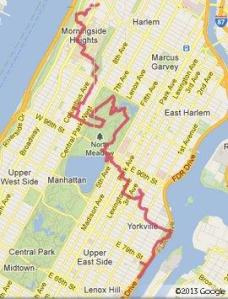 And then, when I thought the fun was over.. wow, I had no idea.
So, it looks a little cultish but it’s fun. there was a LOT of singing, for any reason, and they all knew the songs. So, they’d christen the “virgins”, like me. Call you “racist” if you were any race’s gear… 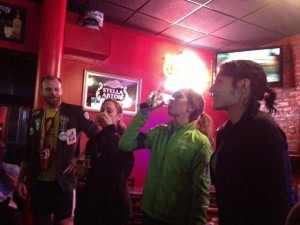 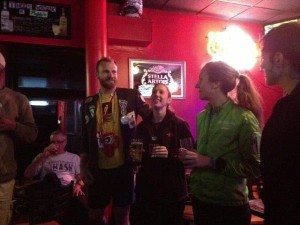 It was just water, don’t get excited… whatever you don’t drink, goes on top of your head or something. I obviously swallowed even the ice cubes! Luckily, no hot dogs!!!!
Helen had to drink because she had raced that day or something… I can’t remember what it was…
Everybody had to do a shot for one reason or another. And there were pitchers of beers all over the place!!
Pizza was there two seconds later and all of a sudden, at 7 pm, I was starting to feel A LOT better!
Anyway, they’re a colorful bunch!! Such a different type of run, you learn a new language, you don’t have a clue where you’ll end up, you’ll see parts of the city you might have never seen, and you meet all these people that run and think it’s fun. They’re just running towards the booze though. I might have to make sure I eat before next time and who knows…!!
**

One thought on “My first HASH RUN! Toto, we’re not in Kansas anymore!”