Basically, I got the ulcer and Gerd pain and symptoms on July 24 (and I was at 113 miles for July) and then it all stopped abruptly. I didn’t run for weeks, and I when I run it was at 11 pace and for 2 miles. Slowly, VERY slowly, I started to get a little bit further though no clue where my speed was!

And I decided Hudson Mohawk wouldn’t happen… What’s the point of racing a fast marathon if I can’t go fast? So, onto New York City Marathon, and decided I had to get a couple of longish runs… Keep in mind, I hadn’t run anything over 13.1 (twice) since my Berlin marathon last year in September. Also, to note, I still can’t stomach a lot of things, so gels are an issue.

I decided to try new stuff and last week longish run was Vanilla Cliff, which tasted great but gave me insane stomach cramps. Today, I took a Stinger Vanilla and a Stinger gold, which also gave me cramps… So I guess I still have to figure that out. The gold one is just like honey, so I loved it.

I run out of energy fast. By Mile 8 my legs wanted nothing to do with running (also, I had just done 11.4 mile-long Upper Loops, which includes Harlem Hill), and I was FADING. Luckily, Juan had decided to torture himself and keep me company, or who knows what I would have done… At mile 15 I hit the wall, he says. I remember feeling like I couldn’t run anymore and was disoriented and tired and I wanted to sit down and cry and a couple offering me sugar out of their bags?!?

Somehow I finished it. I hadn’t run that much in such a long time I forgot what it feels like. Pain, you know? Slow and painful, but it’s in the books. Better than nothing. Screenshot or it didn’t happen! 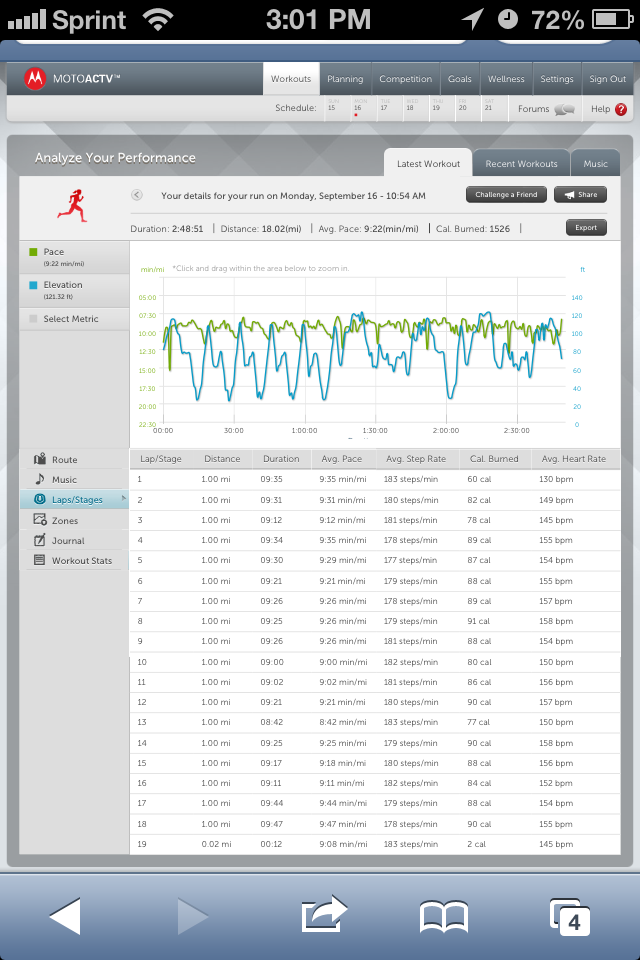